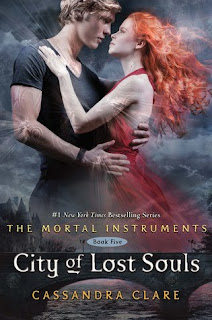 The demon Lilith has been destroyed and Jace has been freed from her captivity. But when the Shadowhunters arrive to rescue him, they find only blood and broken glass. Not only is the boy Clary loves missing–but so is the boy she hates, Sebastian, the son of her father Valentine: a son determined to succeed where their father failed, and bring the Shadowhunters to their knees.

No magic the Clave can summon can locate either boy, but Jace cannot stay away—not from Clary. When they meet again Clary discovers the horror Lilith’s dying magic has wrought—Jace is no longer the boy she loved. He and Sebastian are now bound to each other, and Jace has become what he most feared: a true servant of Valentine’s evil. The Clave is determined to destroy Sebastian, but there is no way to harm one boy without destroying the other. Will the Shadowhunters hesitate to kill one of their own?

Only a small band of Clary and Jace’s friends and family believe that Jace can still be saved — and that the fate of the Shadowhunters’ future may hinge on that salvation. They must defy the Clave and strike out on their own. Alec, Magnus, Simon and Isabelle must work together to save Jace: bargaining with the sinister Faerie Queen, contemplating deals with demons, and turning at last to the Iron Sisters, the reclusive and merciless weapons makers for the Shadowhunters, who tell them that no weapon on this earth can sever the bond between Sebastian and Jace. Their only chance of cutting Jace free is to challenge Heaven and Hell — a risk that could claim any, or all, of their lives.

And they must do it without Clary. For Clary has gone into the heart of darkness, to play a dangerous game utterly alone. The price of losing the game is not just her own life, but Jace’s soul. She’s willing to do anything for Jace, but can she even still trust him? Or is he truly lost? What price is too high to pay, even for love?

Darkness threatens to claim the Shadowhunters in the harrowing fifth book of the Mortal Instruments series.

I am not even sure how I can begin to review this book. Cassandra Clare continues to amaze me with this series. I am going to try to be non-spoilery as best as I can but it may be hard for this one, so read at your own risk!

This book takes place 2 weeks after City of Fallen Angels. Jace and Sebastian are missing from the rooftop where Simon had destroyed Lilith. Everyone believed Sebastian was dead so no one knows how they disappeared together. After Clary is cleared by the Clave of any wrong doing, she gets a surprise visit from both and quickly discovers Jace and Sebastian are connected in a way worse than they could have feared. To hurt one is to hurt the other. And Jace is not totally himself. So how can they break this bond? Jace’s family and friends are willing to do anything to stop whatever horrible plans Sebastian has made and to save Jace.

Clary is typical reckless Clary once again. She doesn’t listen to anyone and steps right into the danger. I kinda like that about her. She knows what she wants and doesn’t let people get in the way of her trying to get it. In this case, she not only calls on the help of the Seelie Queen, but she finds a way to join Sebastian and Jace so she can figure out what evil doing they are up to so she can try to stop them. She was often confused about Jace. She was struggling with her overpowering love for him but feeling conflicted like this isn’t the real Jace that she loved. I have to admit I felt the same way. In many ways he was the same sarcastic and cocky Jace that we all love, but in other ways he was so controlled and blinded by the evil Sebastian has bestowed upon him. But of course there were moments where the real Jace showed his sweet face. I savored these moments.

-“My heart is your heart,” he said. My hands are your hands.”

-“If I kiss you all day every day for the rest of my life, it won’t be enough.”

SWOON. Seriously, Cassandra Clare could probably write a whole book with Jace and Clary sitting around watching tv for the weekend and I would EAT. IT. UP!

Sebastian… let’s just say he totally creeps me out. He is a very complex character. I get that he has demon blood and was raised by a horrible man, Valentine, but his obsession with Clary and Jace is disturbing. Especially Clary. But I guess as a villain, with no concept of what is right and wrong and no morals, he doesn’t care who he is related to.

The list of characters is quite extensive after 5 books, but I don’t think there is another series I have read where I am so invested in what happens to every single one of them. The book is told in 3rd person but flips around to different people and events throughout. I do have to admit that it seems like there was a lot of it in this one. I would become enthralled with what is going on with Jace and Clary and then it would switch to Simon, and then it would switch to Maia, etc. I enjoy knowing what is going on with everyone and seeing how their pieces fall into the puzzle, but at times it seemed too much. Maybe it is just because I want all Jace all the time. LOL But I loved the moments with Simon and Isabelle, as well as Magnus and Alec. Magnus is hilarious and I adore his relationship with Alec. There was definitely tension between the two of them in this one. Alec is very self-conscious when it comes to their relationship and has a hard time accepting Magnus’s past as well as dealing with the fact that as an immortal, Magnus will live on, and most likely love again. This brings an interesting dynamic to the story. One that involves good old Camille…

Now from the last book to this one, there were a few characters and issues that were only brought up very briefly. It was almost like we were teased a bit with their mentions. I am talking about both Raphael and Maureen. There was not much at all of a presence of these vampires. What little bit Maureen does show up though… woah. I am very excited to see what sort of havoc she will cause next!

A HUGE topic that has caused theories to spring up after the last book is the identity of Brother Zachariah. When I first heard of this, I have to say I was surprised because I must have missed any signs! After reading this one, boy do I think some are spot on! This is going to be one huge reveal that fans are going to be salivating over! This actually reminded me of the whole (PSA: this next part will be spoilerish of the final Harry Potter book, but unless you have been living under a rock, you probably already know) Harry being a horcrux. For some reason the thought NEVER occurred to me after reading the first 6 books until I read a book called Mugglenet.com’s What Will Happen in Harry Potter 7. I swear I must be the worse at putting pieces together. LOL But now that it is in my head and after reading this book… GAH! (Also, if you are not reading The Infernal Device Series yet, please do so immediately!).

There are so many things I am looking forward to with the final book in The Mortal Instrument series. Of course I want all of my beloved characters to have a happily ever after, but we have already been informed from Cassandra Clare that it won’t be the case for everyone. This terrifies me. I have all these thoughts and theories swirling around in my head. The wait might kill me. I realize this book has caused me to be a winded and jumbled mess but I cannot help it! THAT IS WHAT THESE BOOKS DO TO ME! I implore anyone who has not yet started this series, and I severely hope you have if you are reading this since I probably spoiled the hell out of the first few books, to do so! And if you are still reading this, kudos for making it to the end. 😉

9 Responses to “Review: City of Lost Souls (The Mortal Instruments #5) by Cassandra Clare”