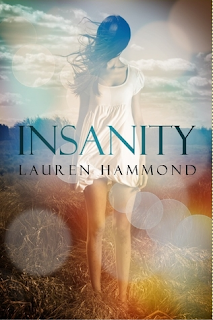 Adelaide Carmichael and Damien Allen couldn’t be more opposite.

Adelaide’s mother abandoned her when she was ten years old, leaving her to be raised by her abusive and alcoholic father.

Damien on the other hand came from a wealthy family, was a local celebrity, and seemed to have a bright future ahead of him.

Despite their differences, Adelaide and Damien were young, wild, and fiercely in love.

And they had a plan.

They were going to run away.

And their plan was set in motion, until tragedy struck and for some reason, Adelaide wound up in The Oakhill Institution for the insane.

Adelaide has no idea what she did to wind up at Oakhill, but she knows one thing for sure…

And after Damien follows her there to aid her in escaping, Adelaide slowly begins putting together the pieces of her memory that are missing.

That one true love never dies.

Insanity is about a girl named Adelaide, who is in a mental institution in the 1950’s. We are told her story from alternating chapters. The ‘before’ chapters give us a look at her home life with her abusive alcoholic father as well as the story of how she fell in love with Damien, her boyfriend who comes from a wealthy family. Their love was a secret from her father, who forbade her from even leaving the house without permission, so there was a lot of secret rendezvous by the tree in her backyard. If that wasn’t enough to deal with, Damien’s mom did not approve, feeling like Addy would hold him back from Yale and the life she wanted him to live. They had all these obstacles standing in their way but their love could not be denied. The ‘after’ chapters are of Adelaide’s time in the institution. She doesn’t remember why she is there but she fears she will never be able to get out. But then Damien shows up as an orderly and promises to help her escape. I am so glad we got to flip back and forth between these two times in Addy’s life. This style really benefited the storytelling, giving pieces of information of the past at the right time.

Right from the beginning I was hooked, wanting to know what happened to this poor girl to put her into this terrible institution. But I have to admit, at some point, maybe about 20% in, I started to feel… a little confused and angry at the characters. I didn’t like or understand their actions and was really worried on the direction of the rest of the book. I trudged on though and thank god I did because somewhere around the halfway point, a lightbulb went off in my head! Maybe I wasn’t seeing things right and needed to look at the big picture. I am terrible at piecing together little clues. I either miss them completely or overanalyze the wrong things. I prefer to just keep reading and enjoy the reveal of information when the times comes. But with this book, I really sat back and thought about what could be happening that I am missing. From that point on I did not want to put this book down! The last few chapters were intense and the ending left me wanting more, which is great because… there will be a sequel! Yay! I am so invested with all of these characters, secondary included, and want to know what will happen next for them.

**I would recommend this book for older teens and up due to profanity, violence, and sexual situations.**

Come back tomorrow for my stop on the Insanity Blog Tour and check out my interview with Lauren Hammond. 🙂