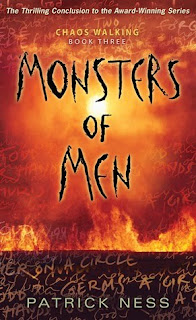 “War,” says the Mayor. “At last.” Three armies march on New Prentisstown, each one intent on destroying the others. Todd and Viola are caught in the middle, with no chance of escape. As the battles commence, how can they hope to stop the fighting? How can there ever be peace when they’re so hopelessly outnumbered? And if war makes monsters of men, what terrible choices await? But then a third voice breaks into the battle, one bent on revenge – the electrifying finale to the award-winning “Chaos Walking” trilogy, Monsters of Men is a heart-stopping novel about power, survival, and the devastating realities of war.

I am going to try to keep this review short and sweet due to the fact that it is for the last book in a trilogy and I am sure many people will not want spoilers if they have not read any of the previous books. I do recommend going back and reading my reviews for The Knife of Never Letting Go (Chaos Walking #1) as well as The Ask and the Answer (Chaos Walking #2), if you want a further look into the rest of this amazing series.

I am not sure how to put into words the amount of love I have for these books. They brought out such strong emotions from me while I was reading all of them, especially this final book, Monsters of Men. I often found myself laughing and smiling, then angry and fearful at certain points, which led to an explosive ending that had me bawling my eyes out. All of that made for one of the best reading experiences I have ever had.

I honestly had no idea what to expect the outcome of this series to be. There is war. A lot of war. Fighting among the people but also fighting with the Spackle. I did expect to learn a lot more about these ‘alien’ creatures on this new world but we get so much more than that. In addition to the points of view of Todd and Viola, we are also given an insight into the mind and lives of the Spackle. I must admit, it did take me awhile to get used to this. Once I did though, I enjoyed these chapters immensely. They worked well with the overall story and pulled the pieces together beautifully.

The love I have for these characters is more than I could have ever expected. Todd and Viola have gone through hell and back but all they ever cared about is saving each other. Their loyalty to each other is so endearing, and they will always have a special place in my heart. I was a sobbing mess by the time I finished this novel but as soon as I closed the book, I longed to open it back up and throw myself right back into this world. I couldn’t have asked for a better way to finish this series.

One of my favorite quotes that completely sums up the Chaos Walking trilogy. I strongly recommend these books to anyone who loves something unique and amazing from a dystopian and sci-fi read.