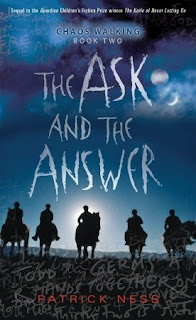 We were in the square, in the square where I’d run, holding her, carrying her, telling her to stay alive, stay alive till we got safe, till we got to Haven so I could save her – But there weren’t no safety, no safety at all, there was just him and his men…

Fleeing before a relentless army, Todd has carried a desperately wounded Viola right into the hands of their worst enemy, Mayor Prentiss. Immediately separated from Viola and imprisoned, Todd is forced to learn the ways of the Mayor’s new order. But what secrets are hiding just outside of town? And where is Viola? Is she even still alive? And who are the mysterious Answer? And then, one day, the bombs begin to explode…

“The Ask and the Answer” is a tense, shocking and deeply moving novel of resistance under the most extreme pressure. This is the second title in the “Chaos Walking” trilogy.

This book, THIS BOOK! It was amazing! After I finished reading A Knife of Never Letting Go, the first book in the Chaos Walking trilogy, I was so anxious to dive back into this world Patrick Ness has created, and find out what has become of our beloved characters, Todd and Viola. I was not disappointed in the least! In fact, I daresay this sequel was even better!

The Ask and the Answer takes place right where the first book ends. Todd and Viola have been separated, both wondering what has become of the other. This time we get both of their point of views, which I thinked worked tremendously for the story. With Mayor Prentiss, or President Prentiss as he prefers to be called now, taking over the town of Haven, problems arise which leads a group called The Answer to wage war on the President. His solution of retaliation is, the Ask. What was great about this storyline involving the 2 groups is that through the alternating points of view, we get to see a bit of what both are doing to wage war on each other. Between both sides, I could never tell what was a lie or the truth. There was so much back and forth, wondering who you could trust and hoping the characters picked the right people to believe. The pacing was on point and I flew through the pages, anxious to get to the end.

What I have to commend the author for is the character development. Such remarkable changes were seen across the board. Todd had some struggles. He kind of checks out, emotionally, at a point but his devotion to Viola never wavers. Viola becomes even stronger and more determined, if possible. The best transformation for me though was of Davy Prentiss. I hated him in The Knife of Never Letting Go and through most of this one. He is an evil villain who was doing terrible things to the characters I loved. But somehow, he GREW on me! I was able to see layers peel away from that boy and reveal someone who was just trying to please his father and someone who really had no one who cared for him. It is so rare to find a transformation like that and I applaud the author for how well he was able to pull it off.

Another surprise for me was how much I enjoyed the Spackle, who are the alien inhabitants of this New World. They are much more prevalent than they were in The Knife of Never Letting Go and so mysterious and interesting.. I am looking forward to even more of them in the conclusion, Monsters of Men.

Overall, this sequel was exceptional with its twists and turns and never knowing which direction it might take. The plot was fresh and kept me on the edge until the very end. I implore anyone who loves Dystopian and Sci-Fi to read this amazing series!

6 Responses to “Review: The Ask and the Answer (Chaos Walking #2) by Patrick Ness”