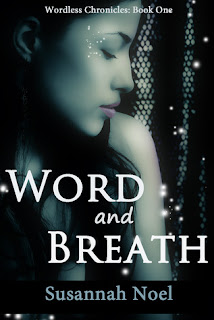 Riana has learned how to stay out of trouble. She spends her days studying written texts in the government’s Office of Readers, and she spends her nights taking care of her sick sister. She always—always—follows the rules. Despite her low profile, she has mysteriously become a target. Someone has kidnapped her sister. Someone else is trying to kill her. And someone has sent a Soul-Breather to beguile her out of her secrets.

Her help comes from the mythic leader of an underground rebel movement. A man who used to be her friend. A man who has silently loved her for years. He disappeared from her life without a word, and now he expects her to trust him again.

Then there’s the Soul-Breather, a man who can taste her spirit with only a touch. He makes her feel things she’s never experienced before, but she doesn’t know if the feelings are real. Hired to deceive and betray her, he offers to help her instead.

Without both men, she can’t rescue her sister. And she can’t discover the world-changing knowledge—buried in her memory—that has made her a target in the first place.

The premise of Word and Breath immediately grabbed my attention from the get go. A dystopian/post-apocalyptic read with a bit of a paranormal element is right up my alley. And lets not forget the love triangle! All this combined for a wonderful read!

The plot was very different that anything I’ve read. I expected more of a paranormal feel to it, with the addition of these Soul-Breathers who have the ability to breathe out memories or feelings with a simple touch, but I found so much more! The world building was great. The story takes place after a cataclysm that destroyed civilization and technology, further changing the way of life. We have a Union, which is the political control of society, and of course no dystopian is complete without some sort of rebellion, or the Front as they are known. There is also a group called the Zealots that seems to hate everyone, but we don’t learn as much about them yet as we do the other two. And guys, this is a world where only a few people know how to read! *gasp* Say it ain’t so! Can you imagine? It sounds like they follow more of symbols and such. The main character, Riana, is a Reader who knows the Old Language and unbeknowst to her, is a valuable asset. This catapults us into the battle to get to Riana. The plot was easy to follow along with, though I do wish we got a little more background on the cataclysm. Since this was just the beginning of a series and we are hit with a lot of other information that was directly relevant to the ‘now’ in the plot, I am hoping we get that from future books in the series. I also craved a bit more action, though I did love the bits we did get.

With the novel being told in 3rd person, we are able to see the inner workings of both sides, the Union and the Front, as a few different characters were the focus. I thought this worked well, to give us more insight into everything going on. I do wish we were able to feel a little more from the main character, Riana. Sometimes the jumping around can take away from a reader’s connection with a character. For the most part it all worked for me but I can’t help wishing I got to feel a little more from Riana.

What surprised me was the character are not teenagers! Riana is 22, with both male characters being slightly older in age. Somehow I was expecting a YA read, but honestly it reads just like one. It was a very pleasant surprise. I am so picky with adult reads so it was nice to have a combo of elements I enjoy from YA included in an age a little closer to me. 🙂

Now, even from the premise, you know there is a love triangle most likely brewing. Do I have my favorite? Of course! I love both boys but I am definitely Team Connor! He appears quiet and shy, but I really think that has more to do with how meticulous he is. He is also very brave, a perfect leader for the rebellion he leads. But then there is Mikel! He is almost the bad boy, in a way. As a soul-breather, he often worked for the Union by extracting information from others with his touch. Of course that’s how his relationship with Riana started, but we get to see him evolve into a caring man in love. *sigh* I feel like out of every character, I got to know him the best so it breaks my heart to root for the other guy, but. . . too bad I am. 😛 It’s funny how I usually root for the bad guy, but in this case, my heart is with Connor.

Susannah Noel amazed me with her writing as well. Often times when I am reading a self-pub or smaller indie pub novel, I can tell within the writing. That was not the case here. The author has done remarkable work and I look forward to reading more from her in the future.

Overall, I definitely recommend this novel if you are a fan of a mash-up of different genres to make one amazing read!