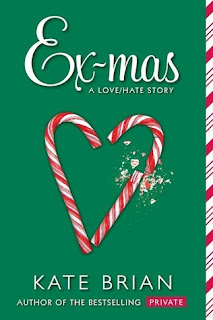 Seventeen-year-old Lila Beckwith’s parents just left for vacation, and Lila’s all set to throw the holiday party of the season. But when her Christmas-obsessed little brother, Cooper, discovers that global warming is melting the North Pole, he and his best friend, Tyler, take off on a runaway mission to save Santa.
Lila has to get Cooper safely home before her parents get back on Christmas Eve. But the only person who can help her is Tyler’s older brother, Beau  a.k.a. Lila’s musician, anti-everything ex-boyfriend.

It’ll take more than a Christmas miracle for Lila and Beau to overcome their differences and find their fugitive brothers. But could a journey destined for disaster help these polar opposites fall in love…all over again?

Once again I found myself in the mood for something festive to read this Holiday season. With Ex-mas I found not only that, but a fun road-trip between bickering exes!

When we start the novel, we meet our main character Lila who is moments away from throwing THEE PARTY to be at. Basically, this party means everything to her popularity as it gives her a chance to stand on her own and not in a shadow of her ‘best friend’. But after her college boyfriend bails due to a last minute ‘final’ (riiiight) and her little brother informs her parents of the party plans, her ‘world’ comes crashing down. Her brother has run off with his friend on a mission to save Santa and Lila, along with her ex-boyfriend, Beau, must hurry to get them back before her parents return.

Lila is one of those characters that annoys the hell out of you in the beginning. She was shallow and completely self-absorbed. Her popularity and hopes for a car were all she cared about. Honestly, it took quite a bit for me to like her. And I am pretty sure when I did it was all due to Beau. That guy had the patience of a saint to put up with her on this road trip, and even after. I truly loved his character. He was sincere, sweet, selfless and incredibly caring. So basically the exact opposite of the Lila we are first introduced to.

Now, as far as the plot goes, I found a lot of it to be predictable and far-fetched. But the thing is, it really didn’t bother me much! Despite my earlier feelings for Lila, I was rooting for these two to find their way back together. There was still a spark lingering between them and I was anxious for it to be relit. The farther they raced to catch up with the little brothers, the more crazy obstacles that got in the way. Personally, I think the brothers were conspiring about more than saving Santa when they ran away together. 😉

Overall, this was a fun read if you are in the mood for something Christmas-y.