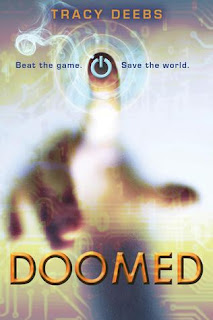 Beat the game. Save the world.

Pandora’s just your average teen, glued to her cell phone and laptop, surfing Facebook and e-mailing with her friends, until the day her long-lost father sends her a link to a mysterious site featuring twelve photos of her as a child. Unable to contain her curiosity, Pandora enters the site, where she is prompted to play her favorite virtual-reality game, Zero Day. This unleashes a global computer virus that plunges the whole world into panic: suddenly, there is no Internet. No cell phones. No utilities, traffic lights, hospitals, law enforcement. Pandora teams up with handsome stepbrothers Eli and Theo to enter the virtual world of Zero Day. Simultaneously, she continues to follow the photographs from her childhood in an attempt to beat the game and track down her father, her one key to saving the world as we know it. Part The Matrix, part retelling of the Pandora myth, Doomed has something for gaming fans, dystopian fans, and romance fans alike.

(I believe this is an older synopsis, since the name of the game is now different in the novel.)

Underneath is a giant, flashing number 10 in bright red, just to make sure you don’t miss it. I try to click on it but nothing happens. Try to click on the message, but no luck there, either. Then the letters dissolve only to re-form with a new message:

The 1 is huge, takes over the entire screen for a brief second before morphing into a graphic of the earth. Seconds later, the world blows up, little pieces streaming across the screen like fireworks. Then everything fades to black. Nothing.        pg. 38

And for some swoons…

His eyes meet mine for a second, and a shiver works its way down my spine. For a second I wonder what caused it – the look in his sapphire eyes when he glances at me or the knowledge that there’s a lot more to Theo than meets the eye.
“No. I just… wasn’t expecting it.”
“Oh.” I put my hand back, trace my fingers over the bruise on his high cheekbone, down his strong jaw to the cut on his chin, over the small slices from running through the trees at the farm yesterday. So many different injuries. So many different times he didn’t back down, didn’t back away, when another guy would have.
“Pandora.” His voice is hoarse, but he doesn’t move away from my touch. in fact, he moves towards it, turning his head just a little so that his lips are pressed against my fingertips in the lightest of kisses.    pg. 290

So what do you think about those teasers? I just had to include them both, even though they are on the longer side. I just finished Doomed a couple days ago and loved it! Great characters and a lot of awesome action. 🙂