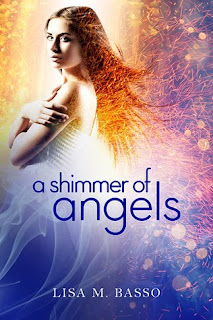 Sixteen-year-old Rayna sees angels, and has the medication and weekly therapy sessions to prove it. Now, in remission, Rayna starts fresh at a new school, lands a new job, and desperately tries for normalcy. She ignores signs that she may be slipping into the world she has tried so hard to climb out of. But these days, it’s more than just hallucinations that keep Rayna up at night. Students are dying, and she may be the only one who can stop it. Can she keep her job, her sanity, and her friends from dying at the hands of angels she can’t admit to seeing?

It is to no surprise that I would jump through hoops to read this book. Besides my love for the angel genre, A Shimmer of Angels has one of the prettiest covers I have ever seen. I mean really, it is gorgeous! With an amazing premise to back it up, I was sold!

Rayna is a very fragile young girl. She has been told over and over that she is crazy and that her visions of angels with wings walking amongst us are a figment of her imagination and part of a mental disease. She has spent a great deal of time away from her family and in a mental health clinic, which she calls the SS Crazy, and pumped up on drugs. Because of this, she tends to act very paranoid, nervous, and even extremely clumsy. The last thing she wants is to end up right back in the clinic. I did have some mixed feelings on her character. I found that she seemed to be in her head a lot in the beginning, always weighing her decisions, thoughts and the consequences that they might bring. At times I did find this to be a tad annoying and bothersome, but then I would remind myself that this story is about a teenager who spent a lot of time thinking that she is crazy and something was wrong with her, so it does make sense that she would be that way to a degree. Kudos to the author for doing a great job staying true to this character’s situation. There is a lot for her to come to terms with as it seems so much of her life has been a lie. There is some evolution to her character though, as she becomes aware of how real the angels are and that she is not sick or crazy. She slowly develops some confidence in herself by the end and I look forward to even more character evolution as her story continues into the next book.

As for the storyline, this is what I felt was really interesting. Rayna discovers that there is a correlation between recent suicides in her school with the presence of these angels. We have the wonderful Cam with the beautiful, bright and shimmering wings who is a Guardian angel sent to protect a fellow student. Rayna is not quick to trust him even though he is the good guy, and I liked that about her. The author did a wonderful job making him stand out with his presence and language, since he was from a heavenly beyond. We also meet the dark, black-winged Kade, who is a Fallen angel. He was definitely more on the bad boy side with his looks and sarcasm. I really enjoyed both of these boys immensely! They were polar opposites in so many ways, except for their overall dedication to helping Ray figure out who is responsible for these terrible murders. What was a great addition to this storyline is that Rayna has a gift and is the only human who can see their wings and knows who they truly are. Even Guardian angels cannot see the wings of those who have Fallen, and vice versa. This makes her a huge target and puts her life, as well as those who care about her, in danger. I loved how it all came together at the end with some action that left me on the edge of my seat with suspense!

I honestly cannot decide which boy I would prefer to be the love interest. Obviously things with Cam seem impossible. Getting involved with a human would get him cast down and turned into a Fallen, and that is the last thing that either of them want to happen. But there is a connection there that they cannot deny. Kade, on the other hand, is so unlike some of the evil Fallen that have turned to demons. He has such a sweet side as well and unlike Cam who is fighting the attraction, Kade embraces it. My only concern there is that he knew, and may have loved (?) her mother. That sends up some red flags for me. lol Damn those red flags! If not for that, I would probably be leaning towards Team Kade. Love me a bad boy!

Like I mentioned before, I love angel books. I actually haven’t read too many though, and perhaps some of that has to deal with being afraid that the general premise may be the same. Where I am sure A Shimmer of Angels has certain aspects in common with the others, I still felt it stood on its own. I truly enjoyed it and absolutely look forward to the sequel!

**Check back on Thursday to learn what the author’s Top Ten Guilty Pleasures are on my stop on the A Shimmer of Angels Blog Tour!

12 Responses to “Review: A Shimmer of Angels by Lisa M. Basso”