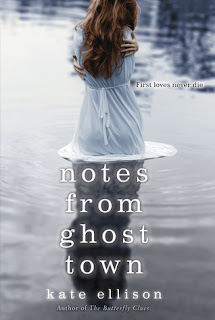 From critically acclaimed author Kate Ellison comes a heartbreaking mystery of mental illness, unspoken love, and murder. When sixteen-year-old artist Olivia Tithe is visited by the ghost of her first love, Lucas Stern, it’s only through scattered images and notes left behind that she can unravel the mystery of his death.

There’s a catch: Olivia has gone colorblind, and there’s a good chance she’s losing her mind completely—just like her mother did. How else to explain seeing (and falling in love all over again with) someone who isn’t really there?

With the murder trial looming just nine days away, Olivia must follow her heart to the truth, no matter how painful. It’s the only way she can save herself.

I must first thank the lovely people at PAPER LANTERN LIT for sending me an ARC of Notes from Ghost Town because it honestly was not on my radar beforehand, and this premise is the total package for me! Upon reading, I discovered a story filled with heartache, mystery and a main character learning how to heal.

The story starts off by giving us a glimpse of Olivia and Stern’s friendship before he was tragically murdered, her schizophrenic mother accused with the crime. I have to say, in just that short chapter I instantly fell in love with the dynamic between the two and was so sad to know what was coming. Jump ahead 10 months and we are down to days before her mother is sentenced. But when Stern’s ghost suddenly pops up, filling her mind with doubt, Olivia finds herself suddenly questioning what happened that night her life changed.

Now, you might see that this book is about a girl who is seeing the ghost of her love and think, ‘this can’t end well’. But the author somehow managed to hold back just enough on the presence of Stern so that we weren’t overwhelmed with the sadness and grief and we were able to focus on the reality of Olivia’s life. Everything about the way this was written was perfection to me. Olivia isn’t so quick to believe what is happening to her, which I appreciated. She was already on edge because of her color-blindness, fearing she would develop schizophrenia like her mother so it took her some time to believe. But in between these times, Olivia is trying to be a normal teenager, and she is not the type to sit at home and pine away. She had enough sense to realize that she needed to move on. She can be crass, likes to party and makes some poor judgement calls. She felt pretty realistic to me. There was a lot of cheeky conversations between her and the other characters, full of playful jabs and humor. That was so needed to lighten up the tone.

Back to Stern… *sigh* I just loved him. There were a few moments that really had me swooning and just full of heartbreak for these two characters and what could have been between them. There is one scene in particular that involves a piano…

I stare at Stern’s hands wrapped around my own but still separate, not there, not whole… and I ache more than ever for him to be solid, to be able to pull him into me for real and kiss his warm, solid, living mouth one more time, two more times, a million more times.
“Wake up,” I whisper to him, feeling suddenly like it really might be possible. “Wake up and be alive.”

Just a very small tease from that scene. But I must also add, there is a semi-love interest from the living, a boy names Austin. Like I said before, Olivia is smart enough to realize that no matter how much she wants to be with Stern, he is dead and she is alive. I really think her being smart enough to hold on to that fact worked out the best. The reason I call this a semi-love interest is because obviously this isn’t the focus for her or the story. I didn’t love Austin, but I didn’t hate him either.

Of course there is the issue of the murder mystery. I did expect it to be a tad more suspenseful, but I still thought it all played out well. I was able to put pieces together myself before the reveal, but I don’t think it took anything away from the journey to Olivia figuring things out for herself.

When it came time to wrap things up, I could not have been happier with how it all went down. Even though there were tears and sadness, there was also growth and healing that put a big ol’ smile on my face. I appreciated how it all came together. It kind of gave me the tingles.

I highly, highly recommend this read. Bonus: it’s a standalone!

10 Responses to “Review: Notes from Ghost Town by Kate Ellison”