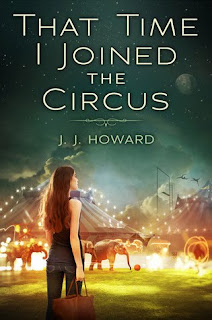 Lexi Ryan just ran away to join the circus, but not on purpose.

A music-obsessed, slightly snarky New York City girl, Lexi is on her own. After making a huge mistake–and facing a terrible tragedy–Lexi has no choice but to track down her long-absent mother. Rumor has it that Lexi’s mom is somewhere in Florida with a traveling circus.

When Lexi arrives at her new, three-ring reality, her mom isn’t there . . . but her destiny might be. Surrounded by tigers, elephants, and trapeze artists, Lexi finds some surprising friends and an even more surprising chance at true love. She even lucks into a spot as the circus’s fortune teller, reading tarot cards and making predictions.

But then Lexi’s ex-best friend from home shows up, and suddenly it’s Lexi’s own future that’s thrown into question.

With humor, wisdom, and a dazzlingly fresh voice, this debut reminds us of the magic of circus tents, city lights, first kisses, and the importance of an excellent playlist.

The circus means something completely different to me as an adult as it did when I was a kid. What was once a magical, happy time has been a little tainted by the harsh reality I now know the animals live in. I jumped at the chance to read That Time I Joined the Circus because I wanted to escape back to my childhood when everything the circus stood for in my eyes was fun and laughter. Did I find that? You betcha!

One tragic night changed the course of Lexi’s life. She quickly finds herself homeless, practically penniless, and on a search for her mom who ran off when Lexie was a kid. The search seems to be a little trickier than she anticipated so she joins up with the circus for a couple months, the last known place her mother was located. At this point in the novel, I resigned myself that this story would most likely have a lot of elements that were far-fetched and not very realistic. Once I set my normal expectations aside, I found a wonderful journey of a girl trying to find herself. Poor Lexi was very confused about the friendships she left broken before she left New York, which we learn more about as the chapters alternate between the past and the present. She was alone and unsure, yet she quickly develops into her own person during her time at the circus. She makes friends, falls for a couple boys, and discovers interests she never realized she had. Even though the circumstances didn’t seem plausible for the real world, it didn’t diminish how real they were to Lexie. There is a hopeful message we find with her character that some readers may connect with. She learns to come out of her shell and do what she loves and that’s a great thing to discover.

I wouldn’t necessarily put any sort of romance label on this book. Yes, Lexi meets a boy or two but honestly there was nothing to get attached to. I was a little confused if I was supposed to be rooting for one of them or not because, well, Lexie didn’t seem too attached to one or another. She does claim to ‘love’ one of the boys at one point, but it definitely felt like that high school love from the teen years. There one day, gone the next. I guess maybe the romance was quite real and fitting in that aspect.

Overall, I think this book will appeal to many people, especially teens. It’s a cute and fun read with a lot of light-heartedness to mask the emotional issues buried underneath.

12 Responses to “Review: That Time I Joined the Circus by J.J. Howard”