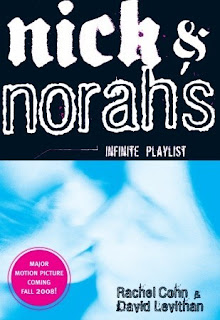 It all starts when Nick asks Norah to be his girlfriend for five minutes. He only needs five minutes to avoid his ex-girlfriend, who’s just walked in to his band’s show. With a new guy. And then, with one kiss, Nick and Norah are off on an adventure set against the backdrop of New York City—and smack in the middle of all the joy, anxiety, confusion, and excitement of a first date.

This he said/she said romance told by YA stars Rachel Cohn and David Levithan is a sexy, funny roller coaster of a story about one date over one very long night, with two teenagers, both recovering from broken hearts, who are just trying to figure out who they want to be—and where the next great band is playing.

Told in alternating chapters, teeming with music references, humor, angst, and endearing side characters, this is a love story you’ll wish were your very own. Working together for the first time, Rachel Cohn and David Levithan have combined forces to create a book that is sure to grab readers of all ages and never let them go.

Last year around Christmas time, I read and fell in love with Dash and Lily’s Book of Dares, another collaboration by these two authors. With high hopes, I dove into this one with excitement and glee and found just what I expected.

Nick and Norah’s Infinite Playlist is told through alternating points of view, each author taking on one voice and merging the character’s together for a wonderful tale of self discovery and learning to let go and take chances. Nick is having a hard time getting over his ex girlfriend. The girl broke his heart, leaving him counting the hours she has been gone from his life and willing her to come back. Norah is also trying to let go of a past relationship and the two meet in a club and chaos, hilarity, and a bit of romance ensues!

I think Norah was my favorite of the two. I got her. She thinks boys kissing is a turn-on (high-five sista!), she’s not afraid to speak her mind and has a take-charge attitude. Nick was a little more vulnerable but oh so sweet (he wrote his ex-girlfriend songs!), yet at the same time, a total guy. These two together were magic, in my eyes.

Just like with Lily and Dash, Nick and Norah find themselves having quite the adventure. The book from start to finish takes place within a night’s timespan. There is a queercore band, a broken down Yugo, kissing nuns, awkward random groping, My So-Called Life references, and so much more. I know that all seems random out of context but this adventure left me laughing and smiling, giving me just what I needed. I sincerely hope these these authors will get together again to give us more adventures and awesome characters!

My heartbeat accelerates. I am in the here, in the now. I am also in the future. I am holding her and wanting and knowing and hoping all at once. We are the ones who take this thing called music and line it up with this thing called time. We are the ticking, we are the pulsing, we are underneath every part of this moment. And by making the moment our own, we are rendering it timeless. There is no audience. There are no instruments. There are only bodies and thoughts and murmurs and looks. It’s the concert rush to end all concert rushes, because this is what matters. When the heart races, this is what it’s racing towards.

*For those you like to know these sort of things, there is quite a bit of swearing that takes place and some sexual situations as well.