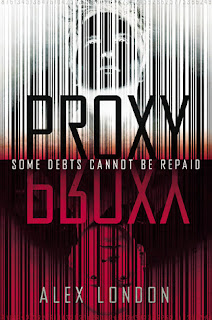 Knox was born into one of the City’s wealthiest families. A Patron, he has everything a boy could possibly want—the latest tech, the coolest clothes, and a Proxy to take all his punishments. When Knox breaks a vase, Syd is beaten. When Knox plays a practical joke, Syd is forced to haul rocks. And when Knox crashes a car, killing one of his friends, Syd is branded and sentenced to death.

Syd is a Proxy. His life is not his own.

Then again, neither is Knox’s. Knox and Syd have more in common than either would guess. So when Knox and Syd realize that the only way to beat the system is to save each other, they flee. Yet Knox’s father is no ordinary Patron, and Syd is no ordinary Proxy. The ensuing cross-country chase will uncover a secret society of rebels, test both boys’ resolve, and shine a blinding light onto a world of those who owe and those who pay. Some debts, it turns out, cannot be repaid.

And now Syd stood face-to-face with the author of his punishment, his lifelong creditor, and he was beautiful, and he was tweaked, and he had killed a girl, and only he could save Syd’s life. pg 108

“Look, Knox,” Syd said, panting. “Just help me and I’ll never bother you again. I know you saw me with the Guardians today. I know that’s how this works. You’ve always seen it. And I know your father pays for it. If I hate anyone, it’s him. I would never work for him. That’s why I never cried when they punished me. I didn’t want to let your father use my tears. They belong to me. So why, after all those years that I didn’t do his work for him – punishing you – would I start doing it now?”
“Because you’re afraid,” Knox said.
“No,” Syd said, and he thought, maybe he really meant it. “That’s you. You’re afraid. I’m just angry.”  pg 122

(These quotes were taken from an ARC and may differ from the final copy.)

I’m halfway through this one and things are definitely starting to get really interesting!