Welcome to my stop on the Belladonna Blog Tour! If you did not already know this about me, I am a huge fan of this series and author! I’m so incredibly honored to be a part of this tour and able to share with you an exclusive excerpt! 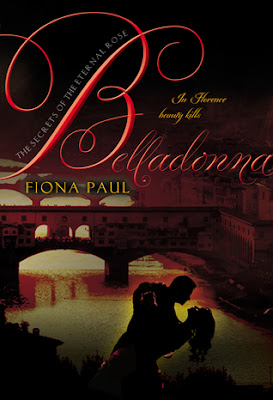 In the second in the stunning Secrets of the Eternal Rose series, Cassandra Caravello is trying to forget Falco, the wild artist who ran off with her heart, as she grows closer to her strong, steady fiancé, Luca. But Luca seems to have his own secrets. When he’s arrested by soldiers in the middle of the night, Cass’s life is once again thrown into chaos. She must save Luca, and that means finding the Book of the Eternal Rose—the only evidence that will prove he’s innocent.

So begins her journey to Florence, a city haunted by whispers of vampirism, secret soirees and clandestine meetings of the Order of the Eternal Rose. And home to Falco, who is working for the Order’s eerily stunning leader, the Belladonna herself.

Can Cass trust her heart to lead her to the truth this time?
Nothing is as it seems in this seductive thriller, where the truth may be the deadliest poison of all.

“What are you thinking?” Mada tilted her head just slightly. “You look as though you might burst out into song.”
Cass blushed, debating furiously about whether to tell Madalena about Falco’s presence in Florence. If she did, Mada would do her best to discourage her from seeing him. But maybe that was what Cass needed.
Before she could respond, loud voices sounded from outside, in the piazza. Cass glanced up from her breakfast with mild interest. A crowd was forming.
“What’s going on?” she asked, grateful for the reprieve from Madalena’s questioning.
“I’m not sure.” Mada frowned.
Cass stood up and moved to the window. The men who had assembled the platform were now dragging prisoners to the center of the square. Women. Noblewomen, from the looks of their brilliant satin-and-taffeta dresses. The assembled crowd was yelling angrily, and people were pelting the women with pieces of garbage. Cass was so shocked, she could hardly speak. Then she caught a glimpse of the woman at the head of the line.
It was Hortensa Zanotta.
Madalena had come to the window behind her. “Isn’t that Hortensa?” she asked. “Santo cielo. She looks awful. I haven’t seen her since the last time she shushed us during Mass.”
Cass felt the impulse to turn away from the window. But she couldn’t move. “What—what are they going to do to them?” Cass whispered.
Mada just shook her head.
The mob was growing in size. A mix of nobles and peasants, of fine silks and muslins, formed a circle around the platform. Hortensa was led to the platform first, and the two other girls followed behind her. Were these the women Hortensa had been with the previous evening? Cass wasn’t sure. All she knew was that Hortensa was in some kind of terrible trouble.
Fiona’s thoughts: I picked this scene for a couple of reasons. First, I’m a big believer in bringing back side characters. Hortensa Zanotta was completely irrelevant in Venom. I made her up just because I thought Donna Domacetti needed some other haughty-types at her tea party. In Belladonna she gets a very important role—a role that could have been given to anybody but felt right for her. Some of the other minor characters from Venom, like Maximus the Miraculous and one of the courtesans Cass meets while she is out exploring, return to have bigger roles in Starling.
I think it was Donald Maas’s Writing the Breakout Novel that recommended paring down and making two characters into one whenever possible. It feels counterintuitive because as a writer we want things to be realistic and reality has a lot of random people who flit into our lives once never to return. However, just like dialogue, we don’t want to exactly replicate real life—we want a condensed, maximally efficient version.  Plus, reducing the number of side characters and reusing them when possible makes remembering who’s who less confusing for the reader and also gives the story a more cohesive feel.

DUN DUN DUUUUUN! Do you know what happens next? I do but I’m not going to tell you! You have to read the book! And guess what? Belladonna hits stores TOMORROW! Don’t forget to check out my review. 🙂

About Venom (Secrets of the Eternal Rose #1): 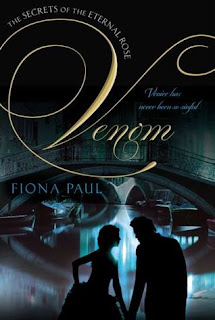 Part Gossip Girl, part Edgar Allan Poe, and wholly beautiful, elegant and suspenseful, this novel set in Venice during the Renaissance is a true romantic thriller. When Cassandra Caravallo visits her friend Liviana’s crypt and finds a murdered courtesan inside, her world is turned upside down. Before she knows it, Cass is involved with Falco, a grave-robbing artist, and on her way to discovering corruption in the elite Venetian society.

But will she find the man who’s been savagely murdering beautiful young girls before he finds her? Will she stay true to her fiance, who’s off studying law in France? Or will she succumb to Falco’s charms? Beauty, love, romance and murder combine in a novel that’s as seductive and stunning as Venice itself. 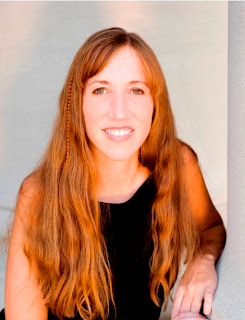 Fiona Paul lives in St. Louis, MO where she’s managed to persuade fancy universities to award her degrees in psychology and nursing. Between her studies, she traveled around five continents and spent time living in Thailand and South Korea (which is probably why she finds the idea of wearing shoes in the house a little weird).

In addition to writing, Fiona is somewhat obsessive about coffee, music, and adventure sports. Her future goals include swimming with great white sharks and writing a whole slew of novels, not necessarily in that order.

**And she has petted a tiger! (sorry, had to add that)

Check out the rest of the tour for more awesome excerpts: