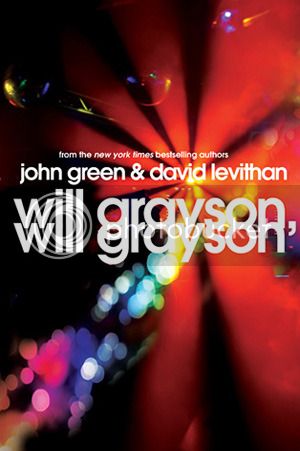 One cold night, in a most unlikely corner of Chicago, two teens—both named Will Grayson—are about to cross paths. As their worlds collide and intertwine, the Will Graysons find their lives going in new and unexpected directions, building toward romantic turns-of-heart and the epic production of history’s most fabulous high school musical.

Hilarious, poignant, and deeply insightful, John Green and David Levithan’s collaborative novel is brimming with a double helping of the heart and humor that have won both of them legions of faithful fans.

Will Grayson, Will Grayson was the choice for our August book club meeting. As a huge fan of John Green’s The Fault in Our Stars as well as a couple collabs David Levithan had previously written with other authors, I couldn’t wait to see what they could do together!

My initial reaction from the first few chapters went something like this, ‘Ooookay?’ lol But the characters really grew on me. Will Grayson #1 is the type who has built a strong wall around himself. He lived his life with a firm belief system that goes like this:

Seriously, that’s how he approached everything. He didn’t want to care about girls or get involved, too afraid to get his heart broken. But he was a total stand up guy who fully supported his gay best friend, Tiny Cooper, in all the ways a friend should. Tiny Cooper was an interesting character. Very eccentric, if I had to describe him in one word. He was a little out there for me at times but at other times he just melted my heart with his ability to love everyone around him. But back to Will Grayson #1… somewhere along the line he changed into this super sweet guy who dedicated songs to a girl he liked at a concert he couldn’t even go to, a boy who said the part he loved most about girls was the noticing – the way they smile, the way they smell.  Such a sweetheart!

Will Grayson #2 I wasn’t so sure about at first. A very distrusting character, the cynical loner type, who had grown incredibly attached to an online friend – one he truly connected with on many levels, one he was hoping for more with. When it all comes tumbling down, the other Will Grayson is there as well as the infamous Tiny.  I must say though, this Will Grayson? HILARIOUS!  He really cracked me up!

The authors did a tremendous job at creating two very distinct characters who were so very different in so many ways, but alike in others. They both were reserved and afraid of who they were but made such a transition from start to finish. Tiny Cooper had a lot to do with that. The story spends time focusing on the building of relationships and of a musical Tiny Cooper has written about his life, his friendship with Will Grayson #1, and love. This was part of the ‘ooookay’ I mentioned above but it grew on me and held a lot of importance towards the end, wrapping the story up in a sweet and wonderful way.

Overall, this collab was full of interesting characters, a lot of laughs and some touching moments too! I’d recommend it to anyone looking for a light and fun read!

To help celebrate the YA Book Club I am a part of, I would love to occasionally offer up a copy of the books we read to a lucky reader! So for this month, I’m offering up a Kindle or Nook copy of Will Grayson, Will Grayson to one of you! This giveaway is international, as long as you are able to accept Kindle or Nook copies.

1. Giveaway is International (as long as you are able to accept books for Kindle or Nook.)
2. Must be at least 13 years old to enter.
3. Winner has 48 hours to respond or another winner will be selected.
4. I am not responsible for any lost, stolen or damaged items.
5. Please follow the entry directions in the rafflecopter. (I do check and will delete entries that do not follow the directions. If you have any questions on how to enter, please ask!)

David Levithan (born 1972) is an American children’s book editor and award-winning author. He published his first YA book, Boy Meets Boy, in 2003. Levithan is also the founding editor of PUSH, a Young Adult imprint of Scholastic Press.

John Green’s first novel, Looking for Alaska, won the 2006 Michael L. Printz Award presented by the American Library Association. His second novel, An Abundance of Katherines, was a 2007 Michael L. Printz Award Honor Book and a finalist for the Los Angeles Times Book Prize. His next novel, Paper Towns, is a New York Times bestseller and won the Edgar Allen Poe Award for Best YA Mystery. In January 2012, his most recent novel, The Fault in Our Stars, was met with wide critical acclaim, unprecedented in Green’s career. The praise included rave reviews in Time Magazine and The New York Times, on NPR, and from award-winning author Markus Zusak. The book also topped the New York Times Children’s Paperback Bestseller list for several weeks. Green has also coauthored a book with David Levithan called Will Grayson, Will Grayson, published in 2010. The film rights for all his books, with the exception of Will Grayson Will Grayson, have been optioned to major Hollywood Studios.

In 2007, John and his brother Hank were the hosts of a popular internet blog, “Brotherhood 2.0,” where they discussed their lives, books and current events every day for a year except for weekends and holidays. They still keep a video blog, now called “The Vlog Brothers,” which can be found on the Nerdfighters website.

31 Responses to “Review + Giveaway: Will Grayson, Will Grayson by John Green & David Levithan”