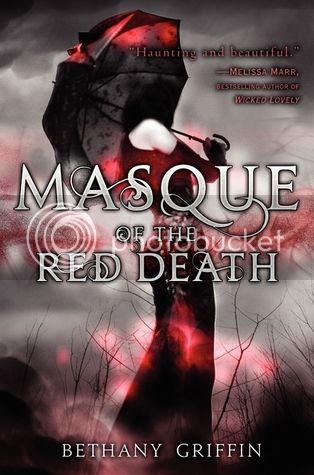 Everything is in ruins.

A devastating plague has decimated the population, and those who are left live in fear of catching it as the city crumbles around them.

So what does Araby Worth have to live for?

Nights in the Debauchery Club, beautiful dresses, glittery makeup . . . and tantalizing ways to forget it all.

Masque of the Red Death has been sitting on my poor shelf for almost 2 years. It’s sad how many books fall through the cracks like that but I was so ecstatic when the girls in my book club showed an interest in reading it too and it was picked for our book club meeting this month!

For anyone who isn’t familiar, Masque of the Red Death is a retelling of sorts from the Edgar Allen Poe short story of the same name. Admittedly, I am not familiar with the original story, but I loved the premise (and the cover) so this was something that definitely caught my eye. This book tells the story of a world infected with a terrible plague. Those who can afford it wear a mask to help keep them safe. The main character, Araby, spends her days in a tower with her scientist father and a mother with whom she has a complicated relationship with. Her nights are filled with getting dolled up with makeup and gowns with her friend April and going to a Debauchery Club to ease her depressive thoughts about her dead brother with alcohol and drugs. It is April’s brother, Elliot, who comes to Araby and asks for her help in his plans for a revolution, to help save the city and the people the best he can from the disease and his uncle’s rule. But can he succeed before the city and prince are overrun by yet another revolution that may be even worse?

So that’s basically the premise. I found the synopsis mentioned above a little vague but it was fun to discover more about the idea of the book as I went. I found the world building extremely interesting. The disease was so devastating and affected so many people and families. The people were terrified to leave their houses. If you were seen out with the tell tale signs of infection, you could be shot and killed straight away, and by any civilian. Unfortunately there just weren’t enough mask being made to go around. I really enjoyed all of this storyline. The dark nature of the world was captivating and the writing was beautiful too. My complaint about it is well, it dragged for me in certain places. I often felt bored, waiting for something to get exciting, something to happen. There was so much world building and setup that it didn’t leave much room for that action that keeps me turning pages. Even at the end. Obviously it picks up a bit but with all the build up I was expecting so much more from it. I wanted it to suck me right in and make up for the slowness I felt, but I never got that. And because it didn’t really have that huge impact climax I longed for, the ending felt like ‘well i guess we’ll just stop here and finish in the next book’. Maybe I’m being a little harsh, but it definitely lacked some excitement.

From the little bit we get in the synopsis you can see there is a love triangle mentioned. Honestly it never felt like one to me… until the very end. Araby meets a tattooed bouncer type at the Debauchery Club and even though she has basically vowed a life of celibacy, a life void of a love her brother would never get to experience, she starts falling for him. I mean, how could you not? He was so sweet to Araby and his little siblings that were his responsibility. I adored him and longed for him on every page. I probably cared about him the most, always worrying what was happening to him and his family when they were off the page. Of course there is Elliot too but it never felt real to me. Things happened I didn’t necessarily expect and well, my heart broke. Mission accomplished with that triangle. That alone makes me want the next book ASAP! I honestly haven’t a clue what will happen with these characters but I know what my hopes are!

As you can see, my thoughts are all over the place with this book. I didn’t love it but I definitely didn’t hate it either. It had so many interesting details and characters and I enjoyed it on a whole. I just wish the excitement and action were a little more prominent.

18 Responses to “Review: Masque of the Red Death by Bethany Griffin”