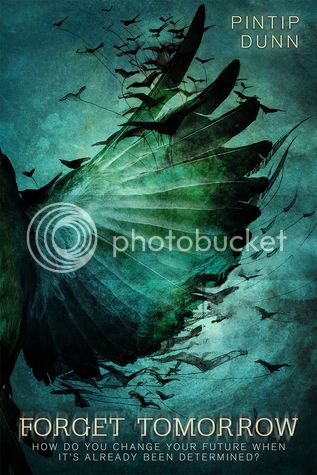 Imagine a world where your destiny has already been decided...by your future self.

It's Callie’s seventeenth birthday and, like everyone else, she's eagerly awaiting her vision―a memory sent back in time to sculpt each citizen into the person they're meant to be. A world-class swimmer. A renowned scientist.

Or in Callie's case, a criminal.

In her vision, she sees herself murdering her gifted younger sister. Before she can process what it means, Callie is arrested and placed in Limbo―a hellish prison for those destined to break the law. With the help of her childhood crush, Logan, a boy she hasn’t spoken to in five years, she escapes.

But on the run from her future, as well as the government, Callie sets in motion a chain of events that she hopes will change her fate. If not, she must figure out how to protect her sister from the biggest threat of all—Callie, herself.

I love the concept on this one. A world where you get a glimpse of your future at age 17 that decides your whole life? Pretty cool yet obviously very scary. Especially when the glimpse can show something… awful, like killing your little sister as we find here with our main character, Callie.

Callie had been preparing for the vision of her future her whole life. A fan of cooking, she hoped to see something to indicate that life. Once you receive your vision, your whole life begins to be shaped to fit it accordingly because it’s fate and it has to happen, right? But something goes wrong for Callie and she sees herself murder her sister. Immediately whisked away for a future in prison for a crime she hadn’t yet committed, Callie is dumbfounded on how this could be so. She manages to escape with the help of her childhood crush, Logan, and goes on the run to find others like herself who hope to change their fate as well.

Callie was a interesting main character. She was a fighter in certain regards who wanted to do everything she could to keep the vision from coming true, wanting to know how such an event could even be possible. But at times she was a little wishy washy too, mostly in regards to Logan.  I think I underestimated her a little though. She surprised me by the end in a huge way! Logan was a decent love interest. Sadly I just didn’t connect with the romance aspect quite as much as I hoped. We were introduced to Logan in the beginning as an old friend she hadn’t talked to in a few years and all of a sudden he was this past potential great love to reconnect with while on the run. It just didn’t fully work for me with the pace and how it was told.

BUT what did work for me was the super cool and intriguing concept. I don’t think I could handle this type of world and the potential of  living your life in fear of what you know is to come. We meet characters living with all sorts of visions, good and bad. The repercussions of those visions are quite severe. Every time we got a new character with a story to tell I was immediately sucked into it, wondering how I would handle knowing that future if I was them.

What we discover with Callie is that there is more to it all. Perhaps the future can be changed… And this is what made me enjoy this novel. There’s a lot more we have left to discover, things we just get a glimpse of, but it’s something I really look forward to. The last few chapters were amazing with an edge of your seat feel. In fact, the ending was the best part! It’s one of those endings that work so well, wrapping some things up but leaving so many more questions that keep you thinking about it well after you finish. I’m anxious for the sequel!

Maybe we could learn to breathe again if we could only forget tomorrow.

One Response to “Review: Forget Tomorrow by Pintip Dunn”