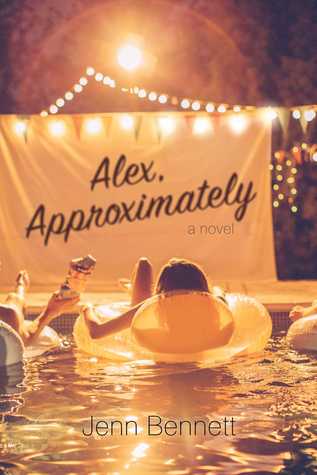 The one guy Bailey Rydell can’t stand is actually the boy of her dreams—she just doesn’t know it yet.

Classic movie fan Bailey “Mink” Rydell has spent months crushing on a witty film geek she only knows online as Alex. Two coasts separate the teens until Bailey moves in with her dad, who lives in the same California surfing town as her online crush.

Faced with doubts (what if he’s a creep in real life—or worse?), Bailey doesn’t tell Alex she’s moved to his hometown. Or that she’s landed a job at the local tourist-trap museum. Or that she’s being heckled daily by the irritatingly hot museum security guard, Porter Roth—a.k.a. her new archnemesis. But life is a whole lot messier than the movies, especially when Bailey discovers that tricky fine line between hate, love, and whatever it is she’s starting to feel for Porter.

And as the summer months go by, Bailey must choose whether to cling to a dreamy online fantasy in Alex or take a risk on an imperfect reality with Porter. The choice is both simpler and more complicated than she realizes, because Porter Roth is hiding a secret of his own: Porter is Alex…Approximately.

Why oh why did I wait so long to read this?! Alex, Approximately was one my my most anticipated reads earlier this year and I stupidly let it sit on my shelf month after month until now. I’m so very thankful I finally picked this one up because once again Jenn Bennett has written a novel to fall in love with!

Bailey has moved cross country to live with her father after things get a little tremulous with her mother, a fact Bailey has chosen to keep a secret from her online movie fanatic friend, ‘Alex’ who just so happens to live in the same town as her dad. Bailey is a private person who hates confrontation and anything that makes her uncomfortable and awkward. And honestly, I’m not sure I’ve ever connected with a character more. So when she meets Porter who is very in your face and loves to tease, I immediately understood her initial reservations. But man does he grow on you! The story follows Bailey as she tries to figure out who ‘Alex’ is in the real world while slowly opening herself up to Porter and discovering the type of person he is and who she wants to be with.

This story made me so happy and giddy. I adored the evolution of Bailey and Porter’s relationship. All the bantering and teasing that becomes friendship and so much more by the end. There are a few secrets they need to work through as well as some drama that unfolds in their wake but I just loved everything about these two. There was the perfect amount of angst, drama, smiles, laughter and swoons. Jenn Bennett is easily becoming an author on my auto-buy list and I vow not to let another novel of hers sit so long on my shelf. I can’t wait for what comes next! Don’t be like me if you haven’t read this one yet. Pick up a copy ASAP and get to reading!

JENN BENNETT is an artist and RITA-nominated author who writes books for adults and teens, including the award-winning Roaring Twenties romance series (Bitter Spirits) and the Arcadia Bell urban fantasy series (Kindling the Moon). Her first YA contemporary romance, The Anatomical Shape of a Heart, (aka Night Owls in the UK) will be released in 2015. She lives near Atlanta with one husband and two evil pugs. Visit her at www.jennbennett.net.