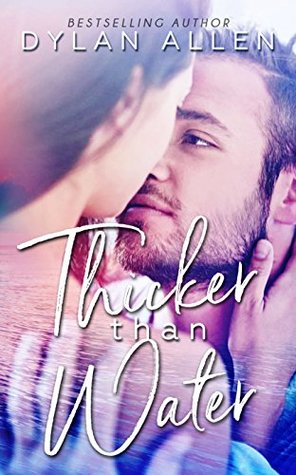 Lucia Vega is on a winning streak.
Her book, Throw Away the Key has taken the country by storm.
And now it’s being made into a movie.
After years of chasing it, she can finally taste freedom.

Reece Carras is one of the most powerful men in Hollywood.
Handsome, rich and generous, he’s everything girls like her aren’t supposed to dream of.
But dream she does. And in his strong arms she finds a freedom she never even knew existed.
Falling in love was the easy part…
Cruel twists of fate and torn loyalties will make staying together seem impossible.
Sacrifices will have to be made.
And they will learn that blood may be thicker than water,
but nothing is more powerful than two hearts that beat for each other.

There is something about a book with a storyline about a writer that I can’t help but be attracted to. So initially, that was what drew my attention to Thicker Than Water. What I found in its pages was much more than a romance with an author main character but a story that touched upon some serious issues affecting so many people in this country – immigration laws.

The basic story is of an author, Lucia, whose new book gains massive acclaim. A book about immigration laws and the undocumented and a character directly affected by it, one of the DREAMERs (minors who entered the country illegally). What people don’t know, however, is that the events in the book are based off of Lucia’s real life. Reece is an ex-Gold medalist and current executive of a movie studio. He’s been very involved in activism with the issues so he knew as soon as he started reading the book that he wanted to make this movie. When the two meet, they cannot deny the chemistry between them but outside forces threaten to stand in their way.

When I first started the book I had no idea the serious topics I would find in its pages and that they would take center stage of this romance. I must admit I was worried it wouldn’t work for me in the beginning but I have to say, the spotlight on the issues was my favorite aspect of the novel. Lucia’s story broke my heart and I felt so connected with her. She has a down to earth and confident personality and yet she’s a very vulnerable and apprehensive person, which stems from her circumstances. I found Reece to be quite admirable and I did love his dedication to the cause and to Lucia. Their romance was quite hot at times, very hot, but there was a little something missing there for me that I can’t quite put my finger on.

While I enjoyed the story being told, it was brought down slightly with the pacing. The middle felt a little slow. I was anxious for things to pick up and grab my attention again, which it later did do, thankfully.

Overall, a good read with a powerful message. I couldn’t help but be touched by Lucia’s story and I think others will be as well. Definitely worth a read!

Dylan Allen is a Texas girl with a serious case of wanderlust.

A self-proclaimed happily ever junkie, she loves creating stories where her characters chase their own happy endings.

When she isn’t writing or reading, eating or cooking, she and her family are planning their next adventure.

4 Responses to “Review: Thicker Than Water by Dylan Allen”