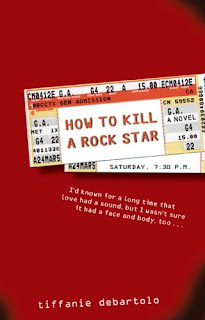 Written in her wonderfully honest, edgy, passionate and often hilarious voice, Tiffanie DeBartolo tells the story of Eliza Caelum, a young music journalist, and Paul Hudson, a talented songwriter and lead singer of the band Bananafish. Eliza’s reverence for rock is equaled only by Paul’s, and the two fall wildly in love.

When Bananafish is signed by a big corporate label, and Paul is on his way to becoming a major rock star, Eliza must make a heartbreaking decision that leads to Paul’s sudden disappearance and a surprise knock-your-socks-off ending.

I have such a love/hate relationship with this book. LOVE/HATE! It is one hell of a rollercoaster ride! Even though there were moments when I just wanted to give up and/or choke a character, I think those moments are what made this story so amazing. It is written in a way that you get so invested in their lives and choices, so it hurts when you see them make mistakes. They felt real, they have flaws, and they were wonderful.

Eliza is a woman who has a tragic past and is starting anew in NYC as a music journalist. Her roommate just so happens to be Paul, the swoony lead singer of her brother’s band. The connection between them is apparent from the moment they meet and they bond over their love for music. Soon the band gets discovered and they on their way into stardom, but things aren’t so easy. Fears and sacrifices get in the way of their dreams for the future.

I found myself smiling and laughing a lot through this book, but there was definetly some crying. Okay, lots of crying. And though I may have wanted to give up at one point, I pushed through. And that is the journey the characters have to learn to take, to face your fears and find a way to push through when things get tough. The end result, for all, was amazing and made it so worth the tears!

I recommemd this book to fans of Realisitic Fiction, Romance and a whole lot of angst!

**This novel is Adult Fiction.**

2 Responses to “Review: How to Kill a Rock Star by Tiffanie DeBartolo”