**In case you missed Part 1 of the recap and the GIVEAWAY for a SIGNED copy of REVIVED by Cat Patrick, you can check that out HERE!**

For my last author session at this year’s Rochester Teen Book Festival, I got to see the very lovely Laurie Halse Anderson. For those who do not know her, she is a brilliant novelist that is probably most known for her books about real issues that teens deal with such as rape, eating disorders and bullying. I have personally read two of her books, SPEAK and TWISTED, and found both to be such powerful novels with very important messages for teens.

So to begin, Laurie wanted to share with us a bit about herself and how she eventually got into writing. She also talked a lot about the books she has written and the inspiration behind them. I tried to write down as many notes as I could so here are a few snippets:

-She shared with us how she had a learning disability that gave her some difficulty learning to read as a child, before she was diagnosed. She had a very short attention span in school which did not go well with being tall and forced to sit in the back of the classroom, free to daydream. And she also shared the emotional roller coaster it is to live with an addict and the struggles her family had as she was growing up.

-Laurie highly recommends to anyone not having a good time in high school, to get a passport and go far away. Laurie spent her senior year as a foreign exchange student in Denmark where she lived on a pig farm for 13 months and she enjoyed it very much.

-The best motivation for college? Working in retail. LOL

-Community College is a great thing. There are smaller classrooms with teachers who will actually know your name. She says this is what turned her brain on.

-Laurie HATED English class and did not major in English at Georgetown but instead earned her degree in Linguistics. She doesn’t recommend this major unless you plan on continuing on to grad school.

-Her first thoughts for book writing were for children’s picture books. She thought the concept sounded easy. She had hundreds of rejection letters over 3 years.

-“Nobody writes a great first draft.” A mistake many writers trying to get published make is that they think they are talented so the first draft is good enough. But Laurie says no first drafts ever get published.

-After a few reoccurring nightmares of a girl sobbing in her head, Laurie sat down and did a stream of consciousness writing which turned out to be the beginning of SPEAK. She found the best time for her to write the novel was between 4-6 AM.

-She has her first rejection letter for SPEAK laminated.

-SPEAK was never expected to be so popular. She was told that teens do not read, but teachers and librarians will read anything.

-Laurie was an extra in the movie for SPEAK. She was a lunch lady and had a simple task but it still took her 8 takes. *hehe*

-Laurie says how she has become the Queen of the Elephant in the Room. She writes about issues people to do not like to talk about.

-TWISTED came to her while she was touring around for SPEAK and was fun to write (for those who do not know, TWISTED is in male POV). She wanted to learn about teenage boys and she discovered 3 things: 1. They don’t know anything about girls 2. They are all involved somehow with bullying, whether they are the bully, the one being bullied, or a bystander 3. They are sad they didn’t have a father figure to teach them how to be men.

-A friend of hers is a pediatrician and she had asked Laurie to write a book dealing with eating disorders. She didn’t decide to go through with it until a few fan emails from girls suffering really showed her how important a book like this could be.

-The only way she would ever approve WINTERGIRLS to be a movie is if she had a lot of control. She would worry how Hollywood would portray the eating disorder in the movie.

I think this session was my favorite part of the whole day. Laurie Halse Anderson is not only an amazing and inspirational writer, but a very motivational speaker as well. I think people of all ages would benefit from listening to her and if you ever get the chance to meet her, DO IT!

As soon as this session was over, the book signings began. I really wish I could have bought so many more books to have signed by all the authors, but alas, my pocketbook would not allow it. I was able to see, and get books signed, by Cat Patrick, Melissa Walker, Megan Crewe, Barry Lyga, as well as Laurie Halse Anderson. (You can check out what books I got signed, if you are interested, HERE!). I was kicking myself for not immediately getting in line for Laurie Halse Anderson because I ended up waiting 1.5 hours in her line, which was almost the entire time! But it was very worth it and I even got an extra copy of SPEAK signed to give to one of YOU!! That’s right, I am having a giveaway for a SIGNED copy of SPEAK!
– 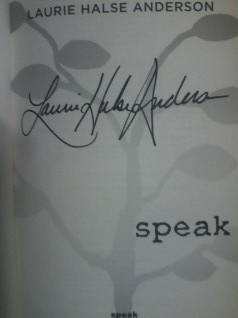 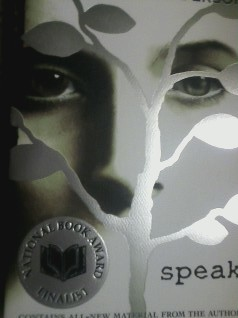