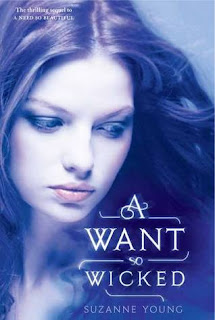 Elise is a normal seventeen-year-old girl until the day she wakes up in a desert park, with no idea who she is.

After that episode, her life takes a bizarre turn. She’s experiencing unexpected flashes of insight into people’s lives—people she’s never met before. Strangers frighten her with warnings about the approaching Shadows. And although Elise has never had a boyfriend, she suddenly finds herself torn between two handsome but very different young men: Abe, the charming bad boy whose affect on her both seduces and frightens her, and the mysterious Harlin, who’s new to town but with whom Elise feels an urgent, elemental connection—almost as if they are soul mates.

Now Elise begins to question everything about her life. Why do these guys both want her so desperately? What are the Shadows? Why does the name Charlotte inspire a terrifying familiarity? And who is Elise, really?

A Want So Wicked was one of my most anticipated reads of 2012. I fell so completely in love with the story and characters in A Need So Beautiful that I was antsy to find out what would happen next, especially with the killer ending in the first book! Words cannot express the joy I had when I won an ARC copy! I jumped right in and fell in love all over again!

This is the story of a girl named Elise. Strange things start to happen to her, while awake and in her dreams. She sees flashes of another’s life and finds herself drawn to helping strangers. Fearing something is wrong with her, she seeks out the help of a local pyschic and finds out she is a part of a world of the Forgotten and Shadows. If things weren’t complicated enough, she suddenly seems to be having boy troubles. Abe is a coworker who comes off strong, making his intentions known from the get go. It is hard to focus on Abe though, when a cute guy on a motorcycle heads into town…

Where the first book focuses more on the Forgotten and the NEED, A Want So Wicked gives us a chance to explore the darker side of the Forgotten, those living in the Shadows. It is a terrible sacrifice to give up your life to save people, but is it worth it to stay and live a cursed life? We are given a chance to consider what it is like to make this decision a little more thoroughly this time around.

I found myself loving Elise as much as I loved Charlotte in A Need So Beautiful. She is such a selfless and amazing character. I really enjoyed the family dynamic between her, her father and her sister Lucy. They are extremely close and I laughed out loud a few times when the girls would share details of their love lives with their Pastor father. I have so much I would love to say about the boys but I do not want to give away too much. Let’s just say Harlin still makes me swoon with his love and Abe creeped me out.

If you were a fan of A Need So Beautiful, you will not be disappointed with its sequel! It has all the appeal of the first plus it is a little more dark and WICKED!

5 Responses to “Review: A Want So Wicked (A Need So Beautiful #2) by Suzanne Young”