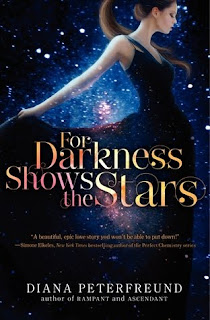 Generations ago, a genetic experiment gone wrong—the Reduction—decimated humanity, giving rise to a Luddite nobility who outlawed most technology.

Elliot North has always known her place in this world. Four years ago Elliot refused to run away with her childhood sweetheart, the servant Kai, choosing duty to her family’s estate over love. Since then the world has changed: a new class of Post-Reductionists is jumpstarting the wheel of progress, and Elliot’s estate is foundering, forcing her to rent land to the mysterious Cloud Fleet, a group of shipbuilders that includes renowned explorer Captain Malakai Wentforth—an almost unrecognizable Kai. And while Elliot wonders if this could be their second chance, Kai seems determined to show Elliot exactly what she gave up when she let him go.

But Elliot soon discovers her old friend carries a secret—one that could change their society . . . or bring it to its knees. And again, she’s faced with a choice: cling to what she’s been raised to believe, or cast her lot with the only boy she’s ever loved, even if she’s lost him forever.

Inspired by Jane Austen’s Persuasion, For Darkness Shows the Stars is a breathtaking romance about opening your mind to the future and your heart to the one person you know can break it.

In a world riddled with growing technology like ours, it always amazes me to read a book with a science fiction and dystopian feel that really makes you think, THIS COULD HAPPEN SOMEDAY! In For Darkness Shows the Stars, we have a world with a past devastation caused by people who were experimenting with genetics and mutations. (scary, right?) This left the Luddites, who were opposed to these methods in the first place, to fear technology even more. Those who were involved with the experiments that survived became ‘Reduced’ by the event and left with mental disabilities. As time has passed, more and more children are being born from the Reduced without the disabilities as it seems to be slowly phasing out. Some of these COR’s (Children of the Reduction), or Posts as they prefer to be called, are starting to have interests in freedom and technology once again.

Elliot (yes a girl, she was named after her grandfather) and Kai both shared a birthday as well as a forbidden friendship. Her Luddite family owned the estate and farm where Kai and his father, along with other Posts and Reduced, worked basically as slaves. Elliot had been getting used and taken advantage of by her family for so long. She was so entirely selfless, putting the well-being of so many others ahead of her own happiness. She just needed something or someone to help push her to fight back. That moment when she does… perfection. She is absolutely a powerful and inspiring character you cannot help but fall in love with. And then there is Kai, who was so incredibly stubborn and proud, yet I found it endearing. He had such sweet moments with their Reduced friend Ro. It was obvious how much he cared about the people he grew up with still. He sure was putting up a good front with Elliot though, but I think this is where the importance of the letters comes into play.

Their past is told through letters they passed back and forth between each other through a knot in the barn door where he lived. Here we get to learn what things were like for the both of them growing up, how their friendship developed, as well as how it led to Kai leaving without her. Gah, THE LETTERS! I absolutely adored these letters! They were the perfect touch to the story and added such depth to the Elliot and Kai dynamic we see in the present time, which is four years after he left. The intimate look into years of their relationship had me rooting so hard for them to find each other once again. Best part of the book for me. Unfortunately, Kai’s return to the estate does not lead to a happy reunion. He is not the same Kai that Elliot remembers. In fact, Kai treats Elliot terribly upon his return. I understand how he could be upset with her for not running away with him, but she really did have a huge reason to stay, and that was to help take care of all the others who were working on the farm. She was the glue that held the estate together, since her father and older sister lacked the skills and desire to run things themselves.

This storyline was so engaging and addictive that I did not want to put the book down! I was fascinated with the world building and desperate to see how all the pieces would eventually come together. I do have to say there were a few moments I did not see coming! And in a good way! I always like when a book can surprise me somehow. The ending was perfection and left a huge smile on my face. I have not yet read Jane Austen’s Persuasion, which this book is inspired by, but I absolutely plan to now! I am really looking forward to discovering the similarities and falling in love all over again! This is one that will absolutely go down on my list of favorites.

This book had everything I wanted in a read – amazing characters, unique and engaging storyline, surprises, sweet memories, and a well paced romance to root for. I highly recommend this book to fans of sci-fi, dystopian and everlasting love.

11 Responses to “Review: For Darkness Shows the Stars by Diana Peterfreund”

Leave a Reply to Sarah@Catching Books