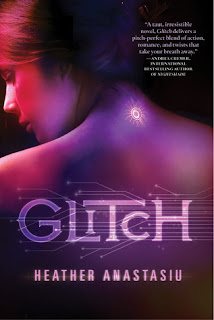 In the Community, there is no more pain or war. Implanted computer chips have wiped humanity clean of destructive emotions, and thoughts are replaced by a feed from the Link network.

When Zoe starts to malfunction (or “glitch”), she suddenly begins having her own thoughts, feelings, and identity. Any anomalies must be immediately reported and repaired, but Zoe has a secret so dark it will mean certain deactivation if she is caught: her glitches have given her uncontrollable telekinetic powers.

As Zoe struggles to control her abilities and stay hidden, she meets other glitchers including Max, who can disguise his appearance, and Adrien, who has visions of the future. Both boys introduce Zoe to feelings that are entirely new. Together, this growing band of glitchers must find a way to free themselves from the controlling hands of the Community before they’re caught and deactivated, or worse.

Imagine a world where people are controlled by computer chips implanted in their brain. There are no emotions – no love or hate – and everyone basically walks around like robots, controlled by the Community. This is the world we find in Glitch.

Right from the beginning of the story, Zoe is having ‘glitches’ in her system. All of a sudden she has her own thoughts, and she discovers the sounds, smells and sights of the world around her. But she is scared. She doesn’t want to get caught hiding this secret, for fear of ‘deactivation’. When she meets others like herself, Zoe wonders if there is a way to break free, not just for herself, but for the whole Community.

Since I am a huge Dystopian fan, I was so excited to dive into yet another new world. I found the storyline and plot very engaging. To think of a world where people are just… existing. There is no happiness, no sense of love, nothing. What was really cool about the glitches was that sometimes it caused people to develop special abilities, like seeing the future or telekinesis. I love how this was all explained by the brain evolving around the hardware implanted. It was all very fascinating to me.

Zoe was a pretty likable character, for the most part. I felt her actions were true to the situations she was put in. I didn’t always agree or like what she was saying or doing, but I understood where her decisions came from most of the time. I loved her discovery of the world, especially the emotions of love and hate. Love was a tricky thing to figure out, which isn’t a whole lot different for those of us who do know what it is. She has love for her brother, who she wants to save from this drone life, but she also discovers love for two very different boys. And I don’t want to call this a love triangle, because I feel like it is pretty obvious who the real love interest is. Adrien is working with the Resistance to help find people who are glitching and get them out into safety. He is patient and kind, and seems to care a great deal for Zoe and her well-being. Then there is Max. He has been bombarded with all these emotions at once and tends to act like he is on emotional steroids. When he is happy he is real happy but when he is upset… well let’s just say I was not a big fan of his a lot of the time. But things with Max weren’t always all bad. Some of his moments really had me laughing, especially when he’s first explaining what ‘pleasure’ is. LOL

I am not sure if there is anything I can really pinpoint that I didn’t like. The relationships moved a little faster than I would have preferred and I would have loved to have seen more about the Resistance, but I have a feeling we will be seeing more of that in the next book. As far as Dystopian novels go, this is a pretty fast and easy read. I found it very enjoyable.

One Response to “Review: Glitch by Heather Anastasiu”