Today’s Teaser Tuesday is part of the Quarantine: The Loners Blog Tour! I am so honored to be a part of this tour. I read this book back in July and LOVED it! (MY REVIEW) It is one crazy ride that I could not put down and I hope you will give it a shot! But for now, check out this teaser! 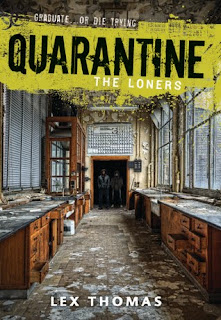 Quarantine: The Loners by Lex Thomas

“McKinley High School crested over the horizon and stared back at them with its countless, tinted eyes, baring its white column teeth.”

I love this teaser because it is some serious foreshadowing for what is to come in the novel! I’m sure a lot of teens feel this way when they look at the school on the first day but wow, aren’t these kids in for a treat when they step through those doors! What do you guys think? Did you ever imagine your school in such a way?

Now onto the giveaway! Two lucky winners will have the chance to win a personalized, autographed copy of Quarantine! Just enter the rafflecopter below! (Terms and Conditions are located at the bottom of the rafflecopter.)

Check out the Blog Tour Schedule:

A huge thank you to the wonderful people at Kismet Book Touring for putting together this fun Blog Tour!

*Teaser Tuesdays is a weekly bookish meme, hosted by MizB of Should Be Reading.