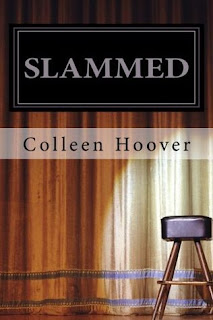 Following the unexpected death of her father, 18-year-old Layken is forced to be the rock for both her mother and younger brother. Outwardly, she appears resilient and tenacious, but inwardly, she’s losing hope.
Enter Will Cooper: The attractive, 21-year-old new neighbor with an intriguing passion for slam poetry and a unique sense of humor. Within days of their introduction, Will and Layken form an intense emotional connection, leaving Layken with a renewed sense of hope.
Not long after an intense, heart-stopping first date, they are slammed to the core when a shocking revelation forces their new relationship to a sudden halt. Daily interactions become impossibly painful as they struggle to find a balance between the feelings that pull them together, and the secret that keeps them apart.

After reading a stream of paranormal reads, a strong contemporary was something I was craving and exactly what I found with Slammed.

The story starts out strong, a young girl, Layken, moves into a new house out of state and is attracted to her new neighbor, Will. They go on a sweet first date, listening to poetry, which is an important part of Will’s life. But then a twist happens. I honestly didn’t expect it. The characters are thrown into obstacle after obstacle, keeping them apart. I love this type angst and tension between characters. To see them really fight themselves and their circumstances to find a way to be together is something that keeps me engrossed in a story and turning pages. I was hooked and had a hard time putting the book down because I wanted to know how they would overcome all that life was throwing at them. My only gripe about it was I wish more of their relationship developed before the twist because it did seem to be a little instalove-ish. But overall, it worked. It was almost like the forces keeping these two characters apart is what was making them fall more and more in love, and I can get behind that in story-telling.

But this isn’t just a story about romance. Family is integral to the novel. Both Layken and Will have a devastating past but their bravery and fight was endearing to read about. Sometimes it felt like, woah, there is A LOT going on with these characters, but I think it also makes it special and an enjoyment to read.

Slammed had so much depth and carried so much emotion throughout. I often found myself laughing out loud, but then having to set the book aside to take breathes amidst my tears. I fell in love with all of the characters, main and secondary. The book would not have been the same without them. My absolute favorite moments were the poetry slams. The words were so beautiful and touching. Every single one. I commend the author for her talent. Slams are meant to be personal and I felt the anger, hurt, happiness and pain in each one a character shares. What else hit me was the attention to little details and how integrated and detrimental to the story they were, like the little purple hair clip. Little things like that are so magical to an emotional read like this one.

I strongly recommend this novel to those who love a good laugh and cry. If you were a fan of Pushing the Limits, than this book may be for you! There is a sequel novel called Point of Retreat that is also available now!