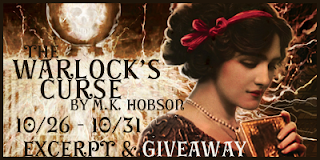 From M.K. Hobson, author of the Nebula award nominated THE NATIVE STAR, comes the newest installment in her Veneficas Americana series–THE WARLOCK’S CURSE.

Welcome to my stop on The Warlock’s Curse Teaser Tour! This tour is a short tour of excerpts on six different blogs as well as a giveaway of a full set of M.K. Hobson’s books and a Tesla Industries pin.

*Please note that while it says this is the newest installment in the Veneficas Americana series, this is the first in a new duology. So it’s new characters and takes place 30 or so years in the future from the previous books and they do not need to be read first. It’s the same world, new characters. 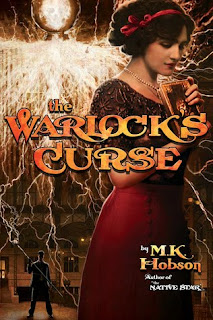 THE YEAR IS 1910. Eighteen-year-old Will Edwards has landed a prestigious apprenticeship at Detroit’s Tesla Industries, the most advanced scientific research center in the United States. It’s a plum prize for a young man who dreams of a career in the new science of Otherwhere Engineering.

But his father doesn’t want him to go. And he won’t tell him why.

Determined to get there by any means necessary, Will finds unexpected support along the way. His old friend Jenny Hansen—daughter of a San Francisco timber baron—is eager to help him for reasons of her own. And so is his estranged brother Ben, who he hasn’t seen in over ten years.

But running away turns out to be the easy part. On the first full moon after his eighteenth birthday, Will is stricken by a powerful magic—a devastating curse laid upon his ancestors by the malevolent sangrimancer Aebedel Cowdray. Will must find a way to control the magic that possesses him—or the vengeful warlock’s spirit will destroy everything and everyone he loves.

And now for the teaser:

Will’s first meeting with Harley Briar, a union organizer for the Industrial Workers of the World.

It was just 20 degrees out, but the young man had only a canvas overcoat, worn over several sweaters and a ragged muffler. As Will approached him, he was trying to light a hand-rolled cigarette with bare, trembling hands. Will remembered a packet of matches he’d picked up when he and Jenny were in Stockton. He’d grown accustomed to putting them in his pocket every day, along with whatever spare change he had, and his apartment key. Stopping in front of the man, Will fished in his pocket and handed the matches to him.

“Thanks, brother,” the young man said, looking up. His eyes became slightly wary when he saw who’d handed them to him. But whatever inspired the wariness, he kept it to himself as he struck a match into bright flame. The sudden harsh illumination revealed dark circles under his eyes. Will was reminded of the Dorians he’d seen at the dance hall in Stockton, but he didn’t guess labor organizers went in for such pretentious affectation.
The young man waved out the match and regarded the packet with interest.

“Hotel Stockton,” he observed. “The private dick said you were from California. I hear tell it’s mighty nice. Oranges and sunshine, right?”

“Plenty of sunshine, I guess,” Will said. “But my family didn’t have oranges. We had horses.”
“Must have had money too,” the young man said, narrowing his eyes as he inhaled smoke. “Poor folk don’t send private investigators looking for their sons.”

When Will did not say anything, the man held out the matchbook with a shrug.

“No, keep them,” said Will. He paused, then added: “Thanks for what you did the other night.”

No comment. Just another indifferent shrug as the man took a pull on the harsh tobacco.

“Hey, you want a cup of coffee?” Will asked. The young man peered at Will curiously, as if wondering if he’d heard him right.

“That’s not a very friendly thing to say to someone offering you coffee,” Will said. “Especially when he’s willing to buy you a sandwich to go with it.”

The young man grinned again as he stuck out his ungloved hand. Even through his own glove, Will could feel how cold the young man’s skin was.

“We ain’t never been properly introduced. Name’s Briar,” he said, drawing it out so it sounded like bra-ar. “Harley Briar. Labor organizer for the Industrial Workers of the World. But I guess you already knew that, right?”

“I knew one, but not the other,” Will said. Then he added sheepishly, “You’ll have to tell me a good place to go. Someplace … you know, safe. I only know the chop suey house and I don’t think I should go back there.”

Briar shook his head. “Boy, you’re on a short leash, ain’t you? Private dicks holdin’ one end and Tesla Industries the other. Hope you didn’t sign any kind of contract with Tesla, by the way. Normally I don’t concern myself with the problems of college boys, but his contracts are awful damn bad.”

It’ll all come out all right. You’ll see. He remembered the words in Ben’s letter. They were surprisingly comforting.

What was done was done. And after all, he was working at Tesla Industries. It would all come out all right … somehow.

Now time for a GIVEAWAY! 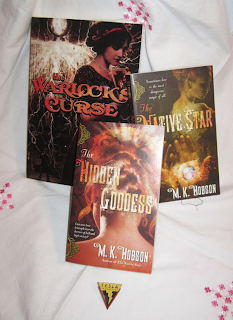 Here is your chance to win SIGNED paperback copies of The Native Star, The Hidden Goddess and The Warlock’s Curse as well as a Tesla Industries pin.

Giveaway Rules:
1. Giveaway is US/CAN only!
2. Must be at least 13 years old to enter.
3. Winner has 48 hours to respond or another winner will be selected.
4. Forever 17 Books will not be responsible for any lost or stolen items.
5. Please follow the entry directions in the rafflecopter. (I do check and will delete entries that do not follow the directions. If you have any questions on how to enter, please ask!)

Make sure you check out the rest of the tour for more amazing teasers and additional chances to win!

M.K. Hobson’s debut novel, THE NATIVE STAR, was nominated for a Nebula Award in 2010. She lives in the first city in the United States incorporated west of the Rockies. Her favorite authors are Theodore Dreiser, Sinclair Lewis, Booth Tarkington, Gore Vidal, and William S. Burroughs. THE WARLOCK’S CURSE is her third novel. You can find out more at her website, www.demimonde.com.