I am so excited to be a stop on the Black City Blog Tour! I was immediately drawn to this premise and gorgeous cover and I am happy to share with you my thoughts on this wonderful novel! 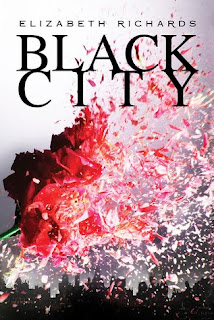 A dark and tender post-apocalyptic love story set in the aftermath of a bloody war.

In a city where humans and Darklings are now separated by a high wall and tensions between the two races still simmer after a terrible war, sixteen-year-olds Ash Fisher, a half-blood Darkling, and Natalie Buchanan, a human and the daughter of the Emissary, meet and do the unthinkable—they fall in love. Bonded by a mysterious connection that causes Ash’s long-dormant heart to beat, Ash and Natalie first deny and then struggle to fight their forbidden feelings for each other, knowing if they’re caught, they’ll be executed—but their feelings are too strong.

When Ash and Natalie then find themselves at the center of a deadly conspiracy that threatens to pull the humans and Darklings back into war, they must make hard choices that could result in both their deaths.

Black City‘s premise immediately captured my attention with its promise of forbidden romance and vampires in a dystopian setting. What I found went so far beyond my hopes and made for one exciting read!

I must start off by expressing my deep love for how the author portrays Darklings, which are such a fascinating take on vampires. Admittedly, I have not read many vampire novels, but the uniqueness of this variety was totally unexpected, but part of what made me enjoy this book as much as I did. The Darklings come in different forms: some have claws, and others have wings and even hang upside like bats. I have not read a deep paranormal with such interesting creatures in quite a while so I forgot how much I love this genre. The concepts of blood vow duets, dormant hearts, bloodmates, venom acting as a drug called Haze, and a deadly plague infecting Darklings that turns them into feral wraths, all created exciting elements that pulled together one hell of a page-turner.

The world we are introduced to is one recovering from a war, racked with devastation and uncertainty. The setup is very political, one side trying to keep the Darklings segregated and the other trying to break down the walls. In the middle of this is Natalie, the daughter of the Emissary who despises Darklings and is willing to do anything to remove them from Black City. Then she then meets Ash, a half Darkling with his own past. Of course any relationship between the two is forbidden and punishable by death. We are given alternating points of view which worked extremely well. Both characters were likable and made you feel for them and their situation. Ash truly broke my heart. His fight within himself to find where he belongs, his heartache, his loyalty… all made him feel so real, a character I can truly connect with.

The romance… it was sweet and building, encompassed by details that made it so much more than I could have ever expected. Even the little twist that was played into it just enhanced the story to a whole new level. My only wish was that I was able to FEEL their love a bit more. With forbidden romance I look for yearning and unresolved desire and tension. I didn’t find as much of that as I expected, but it didn’t retract from my reading experience.

I am beyond excited for the next installment of this series, to see what will happen within this world and of course with the characters I grew to love. I strongly recommend Black City to those who love amazing world building and creativity that keeps you enthralled from start to finish.

Check out the amazing giveaway Good Choice Reading is hosting!

Elizabeth Richards is an award-winning journalist, who spent her early career reviewing videogames before making the bold (or crazy) move into travel writing, despite suffering from terrible travel sickness.

In her spare time, she ran a successful lifestyle website aimed at teenage girls, where she got to interview many of her favourite bands, go to gigs and basically blag loads of free swag all in the name of ‘research’.

Elizabeth lives in Buckinghamshire, England, with her husband. Black City is her debut novel.