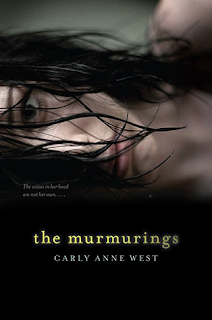 A teen girl starts hearing the same voices that drove her sister to commit suicide in this creepy, suspenseful novel.

Everyone thinks Sophie’s sister, Nell, went crazy. After all, she heard strange voices that drove her to commit suicide. But Sophie doesn’t believe that Nell would take her own life, and she’s convinced that Nell’s doctor knows more than he’s letting on.

As Sophie starts to piece together Nell’s last days, every lead ends in a web of lies. And the deeper Sophie digs, the more danger she’s in—because now she’s hearing the same haunting whispers. Sophie’s starting to think she’s going crazy too. Or worse, that maybe she’s not…

There is so much I want to say about The Murmurings! But I will try to contain my flailing in an effort to be a little more thorough. This book first came onto my radar a few months ago and I was instantly craving to get my hands on a copy! Luckily, I was picked to be a part of the Debut Author Challenge ARC Tour and I couldn’t contain my excitement! And boy did this book live up to every single expectation I had in place!

The novel dives right into the world our main character finds herself in. Sophie’s sister died months ago, leaving her very much alone in the world with a single mother that drowns her grief in alcohol while ignoring the daughter she still has. Sophie comes off as timid and nervous, but she also has a bit of flare and sarcasm to her. Her sister was her best friend and it’s hard for Sophie to have her gone. She takes solace in her sister’s notebook, and tries to unravel the mystery behind her death. Unfortunately, she is now without any friends, that is until she finds some reciprocated interest from a semi-new boy in school named Evan.

These two were off to a very awkward start, both not knowing how exactly to go about, well, anything really. It was kind of cute, actually. They soon discover they have something in common, loved ones who both had problems with hearing voices and seeing things in the mirror. At first I was a little worried that this was all too convenient. I mean, here is this boy who pops up all of a sudden into her life and just so happens to want to hunt down information about an institute where Sophie’s sister, Nell, was placed right before her death. Something she was also doing. But instead of Sophie just accepting this coincidence, she calls Evan on it! From that point on, it all fit and worked out like a charm. They put their detective hats on and started to decipher clues left in a poem written by Nell.

The mystery of what happened to Nell, and also Evan’s cousin, all deals with these strange voices and visions they were seeing in mirrors. Sophie and Evan think there is more to this than just the label, ‘crazy’. In fact, Sophie finds herself dealing with the same exact phenomenon. These indecipherable murmurings of words in her ear and hot breath on her neck… *shudder*. Totally creepy and chill inducing. Don’t even get me started on the visions in the mirror! EEK! This is where the story gets so cool and amazing. We don’t have to wait until the end to find out exactly what it is that is happening to Sophie. We actually find out much sooner than I expected which I thought benefited the plot tremendously. It gave me a chance to really understand what was happening and may have made me freak out all that much more during certain scenes. It is clever and awesome, and unlike anything I have read. It was also easy to follow with so much build that led to one hell of a climax! The excitement and energy that ran through the pages… Gah! So addicting.

I pretty much recommend everyone to read The Murmurings, whether you are a fan of thrillers, with a sprinkle of horror, or not. A final copy of this one is a must for me!

*A very huge THANK YOU to the Debut Author ARC Tour for allowing me the chance to read and review this novel, here at Forever 17 Books.

17 Responses to “Review: The Murmurings by Carly Anne West”