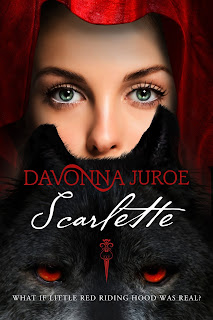 What if Little Red Riding Hood was real?

Ninety years before the Brothers Grimm penned their version of Little Red Riding Hood, a historic, gruesome series of events shocked all of Europe. In 1765, an unidentified wolf-like animal ferociously mauled dozens of peasants in the Gévaudan region of France.

Whispered rumors of unnatural creatures blended with age-old superstition, causing mass hysteria, and a werewolf was blamed for the carnage. Alarmed, King Louis XV sent his best huntsmen to rid the province of the beastly scourge, but this legendary massacre had only just begun.

Scarlette, an 18-year-old peasant, lives under this dark threat, knowing the nightmarish monster lurks in the surrounding forest. A poor seamstress, she labors to make ends meet and is skeptical of supernatural gossip.

Until her grandmother survives an attack.

Scarlette learns her grandmother is infected by the bite of the animal. Desperate to save her, Scarlette begins to uncover the dark secrets of her village and finds there are those who wish to keep their pasts hidden. As time grows short, Scarlette is befriended by a local nobleman and a woodcutter who share an eerie history with the wolf.

To save her grandmother, Scarlette must unravel the mens’ connection and solve a long-forgotten crime. But as she pieces together the clues, Scarlette finds herself torn between the two men, both of whom desire more than friendship and together hold the key to the cure.

Based on both the traditional Grimm and Charles Perrault versions of Little Red Riding Hood, this dark YA is set against the Beast of Gévaudan attacks, blending history with fairy tale and gothic romance. Unique to the genre, the novel revives the French fable of the girl-in-the-red-cloak with a new, shockingly real existence that blurs the line between folklore and reality.

I’ve decided that I don’t read enough retellings. I’ve always loved the fairy tales and read a lot of them in a Children’s Lit class I took in college. I love the dark and grittiness of the original stories that a lot of people don’t even know about due to the popularity of the Disney versions. Therefore, when this book came to my attention, I had to give it a read.

Scarlette is obviously a retelling of Little Red Riding Hood. I have not read either the Brothers Grimm or Charles Perrault versions that are mentioned in the synopsis so I was super excited to see what the author could do from the little knowledge I have of this tale! Overall, I found the plot to be really exciting and fast paced. I was never bored with twists and turns at every corner. The author was also not afraid to keep this story dark or kill off characters you didn’t expect. EEK! And it really didn’t bother me in the slightest. The story is definitely complex and I was mostly able to follow along, though I do admit there were a few times of confusion. Maybe it would have benefited me to try to read this all in one go instead of over the course of a few days? But that’s not really possible for me, so I did forget a few minor bits and pieces and had to truck along, hoping it would come back to me. Luckily, it wasn’t major details and characters and I was able to continue with no problem. I really loved how everything came together and how interesting it was. The author kept me guessing until the very end and that always adds a great element of excitement. I almost wish I had read the original stories it is based on beforehand so I could see the inspiration as I read.

There is a semi-love triangle involved. There is the woodcutter, Francois, and the Baron, Louis. Two very different men who are helping Scarlette in different ways throughout the werewolf attacks that have struck the town and those near and dear to her. They both had their moments of highs and lows, which made it harder to know who to trust and root for at times, though Francois was definitely in the lead for me. The love story is really involved in the plot because both men are right in the mix with the werewolf attacks and what is going on in the town, but I didn’t feel a huge connection to it where it mattered who got the girl, if that was the case. Does that make sense? It is a huge part of the story in a way, but didn’t feel huge to ME. I didn’t find myself overly invested. I’m not sure if that is good or bad. I’m not used to reading love triangles in standalones so maybe there is less time to invest. Plus, the falling in love happened a little to fast for my taste.

Historical fiction is not a genre I read a lot from either, so my frame of reference may not be the greatest, but besides a few french words and descriptions of things around Scarlette, I may not have realized it took place in 1765. The language didn’t seem to fully match, but again, I’m definitely no expert on this matter. Just something I noticed.

Scarlette has inspired me to read more retellings. There is just something about those dark tales and the ways that they can be redone that I need to be a part of.