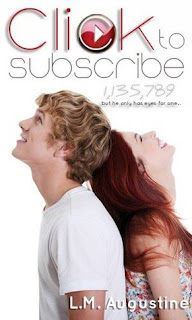 135,789. That’s how many subscribers sixteen-year-old West Ryder has on his web vlog series. But he only has eyes for one of them.

As one of the internet’s most prestigious video bloggers, West talks about high school relationships under the name “Sam Green.” As far as he knows, no one from school, not even his best friend, Cat, has seen his videos. But the highlight of the whole thing is Harper Knight, who comments every day at exactly 2:02 in the afternoon. He doesn’t know anything about her aside from the occasional deep philosophical messaging on why pizza tastes so delicious, but as stupid as it sounds, he might be falling for her. So when they finally agree to meet in real life, West’s hope for romance seems more and more in reach. But that all changes as soon as he arrives at their meeting spot and sees Cat walking toward him, wearing the same “I heart Sam Green” T-shirt Harper promised she’d have on.

To his alarm, West realizes he is falling in love with the best friend who has always been a sister to him.

If I had to sum this book up in one word it would be, CUTE! Prepare yourself because I’ll probably use that word quite a bit in this review.

West Ryder is our main character who has set up a pretty popular vlog during his high school years, unbeknownst to those who know him, or so he thinks. What started out as something to do in his free time has expanded into an outlet, somewhere to escape, as life at home has become an unhappy environment.

I’m more comfortable being who I really am to complete strangers than to the people I’ve known all my life. But all the same, it’s the truth.

Raise your hand if you ever have felt this way, because I definitely have. Well, he meets someone on his vlog and falls for her. Or well, the idea of her. She is someone he can geek out and be silly with, and he doesn’t seem to have a lot of other friends. Except for one… From the synopsis above you can already tell where this is going, right? Harper turns out to be none other than his best friend, Cat. Dun, dun, DUN! What’s a boy to do?

What I adored about West is that he had established some wonderful friendships with not only Cat, but her online persona Harper. Their interactions are sweet and fun (and CUTE!). There are ice cream eating contests and emails in haiku. They make playful jabs at each other which always was great at putting a smile on my face. It was obvious from the get-go how perfect West and Cat were for each other.

What I also greatly enjoyed about this story also was the role reversal. I feel like I’m usually reading from a girl’s perspective with a boy vying for her attention, not wanting to back down. How refreshing to have the opposite! Here we have a boy who is a little self conscious, unsure and afraid of the ‘more’. He’s scared of getting his heart broken and doesn’t want to ruin their close friendship. I was so proud of Cat for holding her ground and her refusal to go quietly into the night. She was confident and strong and I love that kind of spirit from a female character. It was also a blast to watch her try to change his mind.

“We can be friends for now. But, West Ryder, if you think this means I won’t fight for you with every last breath I have, you’re in for a hell of a surprise.”

This whole story was just so full of sweetness. I didn’t always find the voice from a teenage boy to be very realistic, but it was just a tiny blip in the scheme of things. This is relatively short and something you could easily finish in just a couple hours. And guys seriously, it’s so cute!! I strongly recommend this one!

“Well, sometimes love is right in front of you the whole time, even if you don’t realize it. And, like your vlog, all you have to do is click to subscribe.”