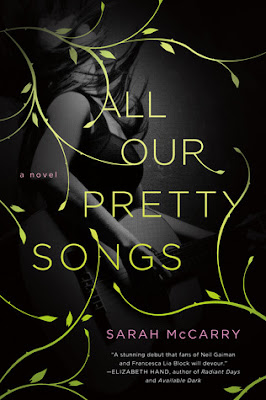 The first book in an exciting YA trilogy, this is the story of two best friends on the verge of a terrifying divide when they begin to encounter a cast of strange and mythical characters.

Set against the lush, magical backdrop of the Pacific Northwest, two inseparable best friends who have grown up like sisters—the charismatic, mercurial, and beautiful Aurora and the devoted, soulful, watchful narrator—find their bond challenged for the first time ever when a mysterious and gifted musician named Jack comes between them. Suddenly, each girl must decide what matters most: friendship, or love. What both girls don’t know is that the stakes are even higher than either of them could have imagined. They’re not the only ones who have noticed Jack’s gift; his music has awakened an ancient evil—and a world both above and below which may not be mythical at all. The real and the mystical; the romantic and the heartbreaking all begin to swirl together, carrying the two on journey that is both enthralling and terrifying.

And it’s up to the narrator to protect the people she loves—if she can.

After 2+ years of entering giveaway upon giveaway on Goodreads, I finally won one and All Our Pretty Songs was it! I was so excited to dive into it but unfortunately the high of winning was deflated a bit as I read the book.

The narrator… well, we never do get her name. I didn’t realize it until about 70 pages in when I could not recall her name for the life of me. It’s not uncommon I’d forget, but backtracking through the book again I realized it was never given. Huh. Well that’s an interesting development. Moving on, we meet her and her best friend, Aurora, and discover how close of a bond these two girls have. The daughters of former best friends who remarkably shared a similar friendship many years before, these girls did everything together and were very much like sisters. Only problem is, Aurora was a train wreck. They loved to go to clubs, listening to music, and staying out all night partying, but Aurora filled her time with drugs, drinking and boys too and our narrator more often than not had to take care of her and clean up her messes. I admire the narrator’s devotion to her friend, which she proves over and over again throughout the novel in so many ways, but I was not so keen with her being taken advantage of and that’s what I felt Aurora was doing.

Once again, in typical YA fashion as it seems, we are treated to a story with characters that have no adult supervision. Ever since Aurora’s famous rock star father died when she was young, her mother has fallen apart and become an addict who doesn’t seem to be bothered to check up on her child. Our narrator’s mother pretends to be protective, a ‘witch’ who dapples in tarot cards and potions and such, but seems more concerned with what her daughter ingests for food rather than what she is up to with her best friend at all hours of the day and night. So suffice it to say, I was a little irked with that.

So anyways, they meet this boy Jack who is an incredible musician. Our narrator is immediately taken with him but is constantly second guessing herself and his affection for her with Aurora in the picture. Aurora was described basically as more beautiful than the most beautiful person you could think of. Jack is described almost similar which kind of made me suspicious of them as we step out of the contemporary feel and more into a paranormal novel. It’s really not until the last 1/3 or so of the book until we venture into a world with strange creatures and scary people with hidden agendas that may or may not deal with the underworld. I thought that was really interesting but I wanted more from it! It’s like we only touched upon it and were left with so many question and no answers. And ugh, the getting there is what I struggled with.

I admire the author for her beautiful, lyrical writing. I was really into it in the beginning.

A single note, faint and sweet, travels all the way from the stars to fall lightly to earth, and then another, scattering soft as rain. His music is like nothing I have ever heard. It is like the ocean surging, the wind that blows across the open water, the far call of gulls. It catches at my hair, moves across my skin and into my mouth and under my tongue. I can feel it running all through me. It is open space and mountains, the still dark places of the woods where no human beings have walked for hundreds of years, loamy earth and curtains of green moss hanging from the ancient trees. Salmon swimming against the current, dying as they leave their eggs, birthing another generation to follow the river back to the sea. Red-gold blur of a deer bounding through the woods. Snowmelt in spring, bears lumbering awake as the rivers swell, my own body stirring as though all my life has been a long winter slumbered away and I’m only now coming into the day-lit world. As he plays the party stills. Birds flutter out of the trees to land at his feet and he is haloed in dragonflies and even the moonlight gathers around him as though the sky itself were listening. The music fills every place in my body, surges hot and bright in my chest. At last he stops. Aurora’s mouth is open, her cheeks flushed. One of the flannel shirts is weeping opening. I can’t catch my breath.

Very beautiful and descriptive. Unfortunately for me though, it got to be too much and overwhelming after a time. I found myself skimming certain parts because I wanted to get to the actual story instead of these long descriptive paragraphs. For a relatively short novel it made it seem so much longer.

So what did I think on a whole? I don’t know guys, I’m really on the fence on this one because it has so much going for it but at the same time I had a lot of issues. I could see the start of so much intertwining between the music and the paranormal touches. I wasn’t 100% thrilled with how it ended but I’m not entirely sure I can write this series off yet. I just may need to check out the sequel to see if anything can be redeemed.

*Thank you to Goodreads First Reads for the review copy as well as the publisher, St. Martin’s Griffin.

**The quote was taken from an ARC and may differ from final copy.

30 Responses to “Review: All Our Pretty Songs by Sarah McCarry”