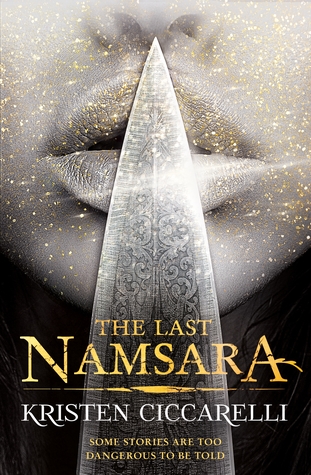 In the beginning, there was the Namsara: the child of sky and spirit, who carried love and laughter wherever he went. But where there is light, there must be dark—and so there was also the Iskari. The child of blood and moonlight. The destroyer. The death bringer.

These are the legends that Asha, daughter of the king of Firgaard, has grown up hearing in hushed whispers, drawn to the forbidden figures of the past. But it isn’t until she becomes the fiercest, most feared dragon slayer in the land that she takes on the role of the next Iskari—a lonely destiny that leaves her feeling more like a weapon than a girl.

Asha conquers each dragon and brings its head to the king, but no kill can free her from the shackles that await at home: her betrothal to the cruel commandant, a man who holds the truth about her nature in his palm. When she’s offered the chance to gain her freedom in exchange for the life of the most powerful dragon in Firgaard, she finds that there may be more truth to the ancient stories than she ever could have expected. With the help of a secret friend—a slave boy from her betrothed’s household—Asha must shed the layers of her Iskari bondage and open her heart to love, light, and a truth that has been kept from her.

I can’t deny that my main attraction to this story in the first place was DRAGONS. I mean, who doesn’t love dragons? I was so happy with their presence on the pages and the story that unfolded around them.

Asha was badly burned by the First Dragon when she was just a child. Now she spends her days dragon hunting for her father the Dragon King and awaiting her wedding to the commandant of her father’s army, an awful man she despises. When her father offers a proposition to call off the wedding if she finds and slays the First Dragon, Asha is determined to gain her freedom and get a little revenge. Of course it wouldn’t be easy though, right?

What I loved about this book is that there is such a richness to the world building. Stories and legends are a huge part of the novel. We are told a few in between chapters and they all pertain directly to the plot, but they also are considered forbidden by the Dragon King as they attract dragons and cause them to breathe fire.  The world building was one of my favorite aspects of the novel but also the one thing that tripped me up a bit as I struggled to keep up with it all in the beginning. Some aspects felt sort of elusive in a way, and some deliberately so as we uncover all sorts of twists and turns I didn’t expect. But the way it all came together was so unique and interesting! As the pieces unraveled I felt myself become more and more engrossed and needing to know what truths would be exposed next.

I really loved the main character of Asha. She’s tough and a complete badass and that’s what she let’s people see of her. But on the inside she is more vulnerable than she lets on. Nothing means more to her than her freedom but her whole world sort of flips upside down throughout the story and she goes through quite a bit of growth and development. She softens in so many ways, especially when she finds herself falling for a slave, Torwin. I’m a sucker for a forbidden romance and I loved the chemistry between these two and the journey they took.

I was thoroughly impressed with this novel. I cannot wait for the sequel and for more dragons and more Asha!

Kristen Ciccarelli hails from Ontario’s Niagara Peninsula where she grew up on her grandfather’s grape farm. She spent her childhood running wild with her cousins, adventuring in the woods, building forts in the barn, and obsessing over books, dragons, and girls wielding really cool weapons. Visit her at kristenciccarelli.com.

7 Responses to “Review: The Last Namsara by Kristen Ciccarelli”